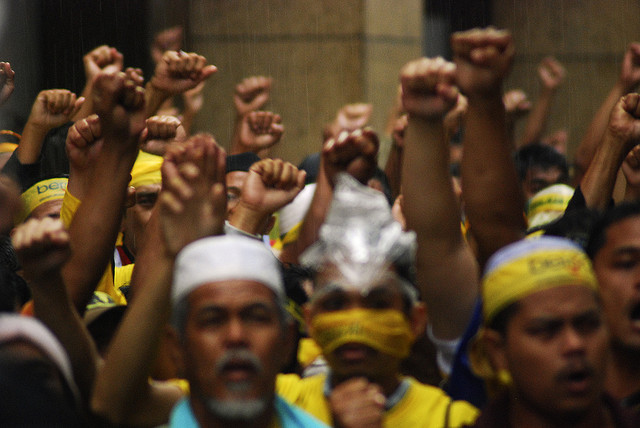 The movement for Democracy in Malaysia, called Bersih, has planned a major protest against the allegedly corrupt and decidedly struggling Malaysian Prime Minister Najib Razak and his administration.

Called Bersih 4.0, the protest is planned for August 29-30 and arises amidst allegations that Najib smuggled some US$700m into his personal accounts.

Bersih 4.0 will be comprised of several rallies in Kuala Lumpur and across Malaysia. Besides demonstrating general discontent with corruption, the focus of Bersih 4.0 is to ensure that the next election be “clean.” The parliamentary election in 2013 saw opposition leader and Democrat Anwar Ibrahim fail to gain power even though he won nearly 52% of the popular vote. Bersih 4.0 supporters are demanding a fair chance for Democracy in Malaysia in the next general election (to be held on or before August 24, 2018).

The idea of Democracy in Malaysia is for many a hopeful one. Support for some of Malaysia’s most important causes – environmental sustainability, community development and sustainable economic growth – is coming most strongly from the public. Given the chance to influence a Democratic government, Malaysia’s people could more effectively push for ethical and sustainable improvements that have been overlooked by past administrations.

For this and other reasons, tensions are high surrounding the rally. The city of Kuala Lumpur has refused to let Bersih use the two venues at which members plan to meet, and police have stated that because of this, they cannot allow the protest to occur at all. However, previous protests have brought 100,000s of people into the streets despite police suppression and the general feeling is that Bersih 4.0 will happen with or without police consent.

As potentially explosive as the situation might sound, the organizers of Bersih 4.0 are intent on holding a peaceful protest. Bersih 2.0 chairman Maria Chin Abdullah said in interview with The Star that Bersih 4.0 organizers had been offered alternative Kuala Lumpur venues like Stadium Merdeka and the National Stadium in Bukit Jalil. Fellow chairman Jannie Lasimbang said that the state level protest in Kota Kinabalu, Sabah in Eastern Malaysia would entertain a “carnival-like atmosphere” on the beach at Likas Bay, adding that the event would include “entertainment, talks and discussions on various issues.”

Though it will be peaceful and even entertaining, Bersih 4.0 is putting up a real fight for Democracy in Malaysia. Past administrations have brought the country explosive economic growth, but that growth has been uneven and at great cost to Malaysia’s community and environmental health. What Malaysia’s future might look like under Democratic government is uncertain, but it would certainly give more sway to public opinion and therefore sustainability.