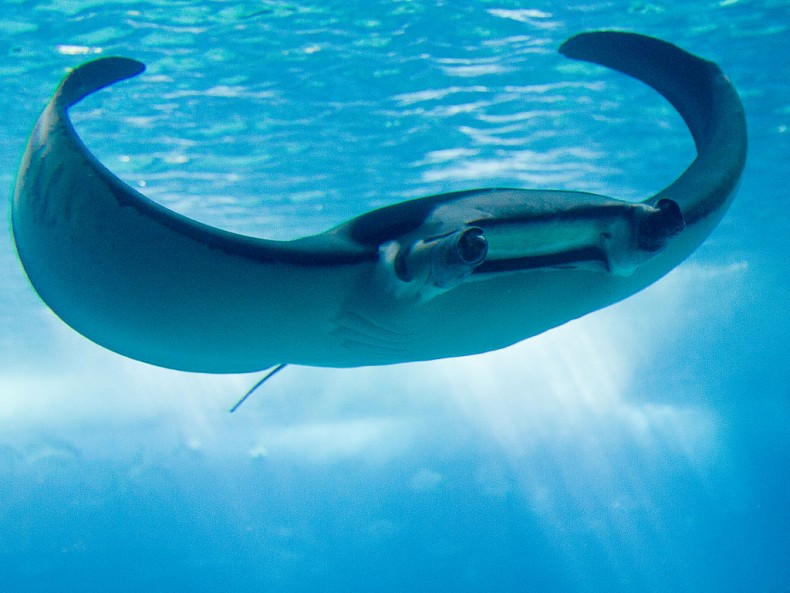 A sizeable population of giant manta rays has been discovered in Malaysia, inciting diver interest and prompting cries for the protection of these endangered species.

In December of last year, a diving expedition set out for Pulau Perak, a remote island off the eastern coast of peninsular Malaysia.  The divers had heard fishermen report manta ray sightings in the surrounding reefs, and they discovered the stories to be true.

“Out of a total of six dives, we spotted them on four dives at locations just below the surface, up to 30m down,” said expedition leader Datuk Izham Yusof.

This was quite a discovery.  Manta rays are rare and notoriously difficult to spot even when scuba diving in Malaysia, one of the world’s hotspots for marine exploration.  Stretching up to 7m (23ft) in width, these giants are a sight to behold but are threatened by pollution, accidental entanglement in fishing nets and illegal poaching.

Manta rays are sought after for their skin, liver and flesh, which are believed by some to have medicinal properties.  A conservation collective called the Manta Trust has launched occasional inquiries into Malaysian fish markets, discovering parts of rays for sale and confirming the presence of a manta ray fishery somewhere in the country.  It’s a serious threat to the species – female manta rays only give birth to one pup every two to five years, making them one of the most sensitive endangered species in Malaysia.

Izham, who led the expedition, recorded data on the trip in hopes of commencing a conservation strategy to further protect the giant mantas.  Now that the presence of this new population is known, the rays will likely need it.  Izham’s efforts combined with new government strategies (some cleverly utilizing social media) for cracking down on illegal wildlife trading will hopefully ensure the survival of this pod of endangered creatures.

We would like to issue a reminder to all divers reading this always to respect the natural habitats you explore and the wildlife you discover. Also keep yourself safe by abiding by local laws, respecting tides, and keeping your equipment such as diving watches up to date.