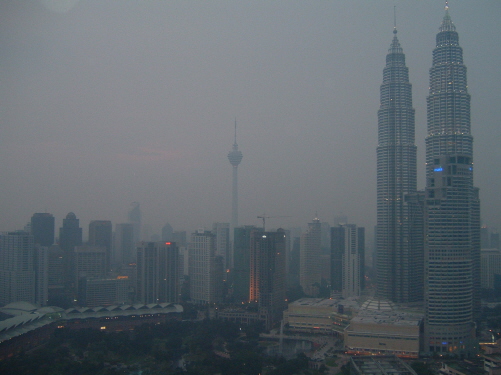 Kuala Lumpur during a 2006 Haze by Earth via Wikimedia Commons

Air pollution in Malaysia, or haze, as it’s more commonly known, has been a problem for many years.  Haze is a hazard to people and planet alike, and though it plagues much of Southeast Asia, Malaysia is one of the worst affected areas.

Every few years Malaysia suffers a haze epidemic that grinds all activity to a halt.  In 2005, a choking cloud of smog gripped the country for a week, forcing authorities to declare a state of emergency.

Air pollution records were set again in 2013, requiring national governments to spend over $20 million fighting fires and creating artificial rain with “water bombings” from military aircraft.  These epidemics – and the moderate levels of air pollution measured throughout the year – result in serious detriments to community and environmental health.  The issue is serious, and it’s one that Malaysia will have to confront soon in order to safeguard its very development as a nation.

The Causes of Haze

The primary cause of haze in Malaysia is open burning – fires raging through the rainforest and sending up massive plumes of smoke.  Some fires are unintentional, the result of unusually dry weather and climate change.  But much of Malaysia’s open burning is due to illegal slash-and-burn land clearing techniques used by farmers and palm oil companies.  Such activity has decreased due to stricter law enforcement and high-tech monitoring technologies, but still is not uncommon.

Smoke from these fires is devastating, and the plumes can be large enough to be seen from outer space.  The fires responsible for 2013’s Southeast Asian haze were photographed by NASA satellites and linked to illegal burning on the Indonesian island of Sumatra.  Indonesian smoke often billows into nearby Malaysia and Singapore, building international tension and complicating the problem of haze management. 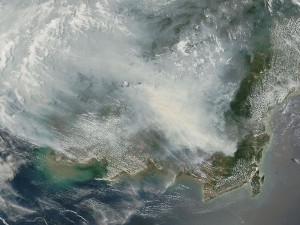 Other causes of haze include emissions from vehicles and industrial boilers, but open burning is by far the biggest contributor.

Malaysia is especially susceptible to haze pollution because of its atmospheric conditions.  Dry weather, which Malaysia has during parts of the year, encourages haze.  Airborne particles are “washed” out of the sky when they’re absorbed by moisture and rain, but without rain they remain floating.  Wind speeds are also generally low in the tropics, so smoke, exhaust and emissions stick around in Malaysia rather than getting blown away.  Air movement sometimes slows to a near standstill in Malaysia’s stable atmospheric conditions – January to February and June to August for Peninsular Malaysia.  These are also the driest months, which makes matters worse.

The Consequences of Haze

The effects haze can have on a person’s health are still being researched, but what’s been discovered so far is startling.

Haze intensity is monitored according to a rating system called the Air Pollution Index (API).  For ease of understanding, the index breaks ratings up into five main categories: good (0-50), Moderate (51-100), unhealthy (101-200), very unhealthy (201-300), and hazardous (anything above 300).  A state of emergency must be declared if the API exceeds 500.

Malaysian API ratings just before a state of emergency was declared in 2005 by Caine via blogspot.com

During crises, API levels of 300 are not uncommon.  Those above 500 have been recorded multiple times, and on 23 June 2013, a nearly inconceivable API rating of 746 was recorded in Muar, Malaysia.  The short- and long-term health effects of exposure to such levels haven’t been researched, but the consequence of even short term exposure to API levels in the 100’s – even every once in a while – are looking more and more serious as additional research is carried out.

Most studies more than a few years old report simply that short term (around one to three days) exposure to ‘unhealthy’ levels can result in eye, nose and throat irritation.  Malaysia, Singapore and Indonesia usually deal with short term exposures like this, repeated several times a year.  This sounds unthreatening, but a study after the 2013 haze crisis concluded that “…even a short-term exposure to haze is associated with acute physical symptoms and mild psychological disturbances in healthy individuals.”  The study also recorded irritability, easily startled responses, insomnia and poor concentration in its young and healthy respondents.  The

Much more disturbing are the results from a 2002 study on haze and mortality.  Among the findings were that in affected areas, death rates on a day of high air pollution were 20 percent higher than on a normal day.  It was also determined that following a day of high air pollution in Kuala Lumpur, non-traumatic mortality among ages 65-74 increases by approximately 70 percent.

Solutions to the Haze Problem

Every Southeast Asian country except Indonesia signed a document called the ASEAN Agreement on Transboundary Haze Pollution.  Recognizing that haze is a regional rather than national problem, they have been attempting to improve air quality as a group ever since.

Though the causes of haze (now mostly rural farmers suddenly deciding to burn down forests) are very hard to control, the haze agreement has seen real progress made.  Singapore has offered to “tackle the haze issue at its root” and work with farmers in Indonesia.  And the agreement eventually saw the involved countries approve and implement an advanced haze monitoring system.

The ASEAN Agreement on Transboundary Haze Pollution is accused of being vague and lacking enforcement mechanisms.  This is true in some ways, but it is legally binding document, and it does require cooperation between ASEAN countries – something the region has fiercely opposed in the past.  As such, the signing of the agreement was a huge leap forward.

Late last year, Indonesia finally joined the fight and signed the agreement.  Now that the foremost contributor to haze pollution is legally obligated to shape up, more serious progress might be made.  The people and environments of Malaysia and indeed all of Southeast Asia are depending on this progress, and they look forward to the good news Indonesia’s signature may bring.