Kota Kinabalu Makes Headlines for More than its Majesty 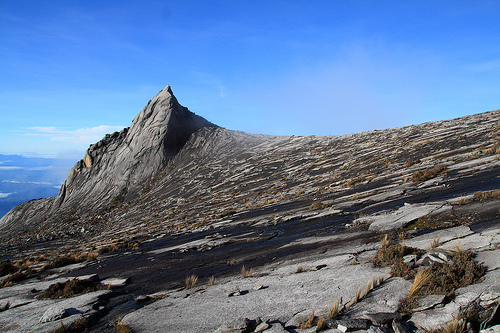 The south peak of Mount Kinabalu by Eric BC Lim @flickr

The jagged peaks of Malaysia’s Kota Kinabalu are the stuff of legends.  Iconic to its surrounding state of Sabah, the mountain is especially revered by the Kadazan Dusun people who live nearby.  Their ancestors believe that Kinabalu rises to the heavens, making it the final resting place for those who have passed away (the word “Kinabalu” is derived from a phrase meaning “revered place of the dead”).  For this reason, it was especially offensive when a group of travelers decided to turn the summit into a temporary nudist colony.

A Unesco World Heritage Site and popular climbing destination, Mount Kinabalu has been central to local Malaysian culture for generations.  Legends of princes, maidens and dragons enshroud its misty heights, and age-old tradition holds that Kinabalu was designated as the center of the world by great dieties.  That anger resulted from the nudism incident is understandable, but that one backpacker responded to being detained with a series of dismissive and rude remarks on his popular travel blog is not.

Following the nudism incident, a magnitude 6.0 earthquake struck Sabah, killing 18 people.  Many locals blamed the quake on the involved tourists, and four of them were detained by Sabah State Police.

“We detained all four of them on Tuesday … and yes we are still searching for the other six tourists, and we will catch them,” said Sabah police commissioner Jalaluddin Abdul Rahman several days after the fact.

The police didn’t fault the tourists for the earthquake, but held them for causing a public nuisance.  It was after this that backpacker and Canadian national Emil Kaminski used his travel blog to slander Malaysian culture.  Anger turned to outrage as nude photos spread across the internet through social media.  It was an unfortunate clash between travelers, Malaysia’s stunning natural treasures and the culture surrounding them – and it all could have been avoided if the tourists showed more respect.

Mount Kinabalu and all of Malaysia’s mountains, forests and parks are some of the oldest and most biodiverse places on the planet.  They are there to be enjoyed, but they must also be protected, valued and honored.