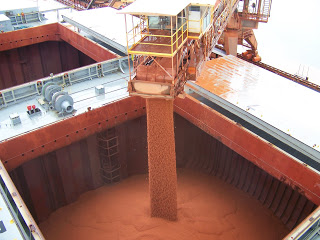 Early this year a ship loaded with bauxite suddenly capsized and disappeared beneath the waves, leaving just one of its 19 crew members alive and spilling its entire shipment into the ocean.

Bauxite mining in Malaysia is intensely controversial for several reasons, and this capsizing raises yet another – the risk of cargo liquefaction.

Liquefaction is the transformation of something solid to liquid.  When it happens to the contents of a cargo ship, it’s extremely dangerous.  Once liquid, the ship’s cargo starts sloshing around, resulting in a “free surface effect” that compromises the boat’s stability.  To understand the free surface effect, imagine balancing a bowl half-filled with water on your upturned palm and taking a few steps.  With each step, the water will move more from side to side or front to back, making the bowl very difficult to stabilize.  That is essentially what happens to a boat with liquefied cargo, and it can easily result in capsize.

Bauxite liquefaction wasn’t previously considered to be a risk, but it seems highly likely that this is the reason the Bulk Jupiter and its payload of bauxite rolled over and sank so quickly.

Most articles covering the sunken ship speak in terms of insurance dollars and professional risk, but few of them consider the environmental implications of bauxite liquefaction.  The dust scattered by the unregulated mining process has by itself created serious health problems for nearby communities.  It’s killed fish in rivers, contaminated soil and waters with toxic chemicals, and raised serious concerns about cancer.  Considering how much trouble dust has caused, the thought of entire bauxite shipments getting rained on, liquefying and draining into soil and waterways is quite worrisome indeed.

Further evidence of shipment liquefaction is scattered, but has been recorded on several occasions.  If a shipment composed of small particles gets too wet, it will liquefy just like any other powder.  It seems some miners are being dishonest about the solidity of what they’re loading onto ships – and if a captain doesn’t know how ground-up his bauxite is, he might be more likely to let it get wet.  This new risk adds yet another item to the list of environmental woes surrounding bauxite mining in Malaysia, and underlines yet again the need for better regulation of the industry.