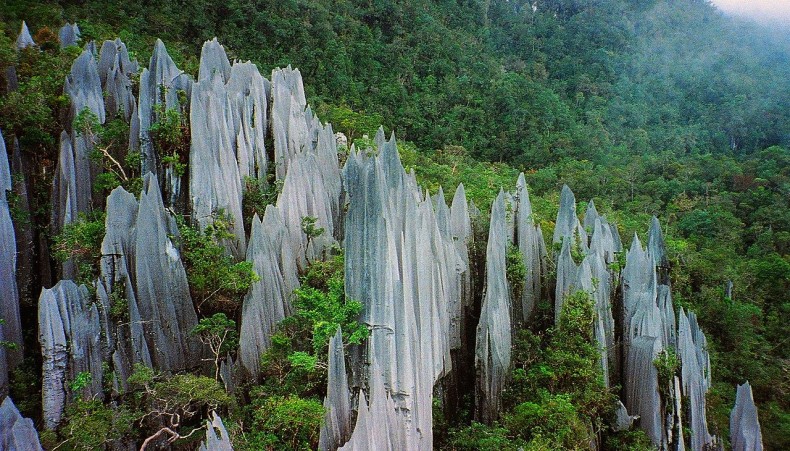 Gunung Mulu National Park is a stunning environmental reserve in Sarawak, Eastern Malaysia.  Though most famous for its natural beauty, the area is continually being proven important to Malaysia and the rest of the world in many other ways.

A combination of forests, caves, wildlife and breathtaking karst stone formations, Gunung Mulu National Park was declared a Unesco world heritage site for its unique scenery and expansive array of native plant and animal species.  Some 3,500 species of vascular plants and 109 species of palm trees flourish here, along with countless types of mosses and fungi.  From the world’s smallest mammal to some of the world’s largest insects, ‘Mulu Park’ is alive with animal species as well – many of them endemic.  This area provides protection for these creatures and comprises a substantial area of Borneo’s primary tropical forest.

According to Unesco, Mulu Park is the most studied tropical karst area in the world.  At least 295 kilometers of caves riddle the earth, providing researchers with unparalleled opportunities to study cave species.  The stalagmites found in these caves give scientists a 100,000 year history of rain patterns in the tropical Pacific, and research has provided valuable insight into the nature of climate change over time.  Above ground, blade-like karst spires provide a rarified example of geologic processes also invaluable for scientific research.

All this overwhelming scenery has made Gunung Mulu National Park a premier destination for ecotourism in Malaysia as well.  Park entrance fees and fees to enter specific areas contribute substantially to the country’s economy, so protecting this park is critical to the continued development of Malaysia.  In a recent and forward-thinking move, Malaysia has taken its national biodiversity policy under review to include considerations for ecotourism.  The revisions are aimed at making ecotourism sustainable in the long-term.

With continued protection and ongoing revision of environmental laws, places like Mulu Park will be around for a long time.