Malaysian Politics: in Need of Refocus 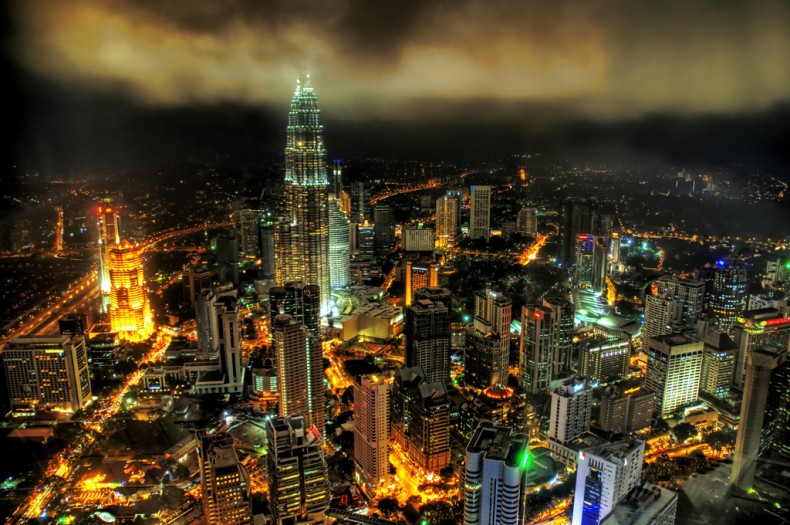 At present, Malaysia finds itself in dire straits.  Prime Minister Najib Razak is at the center of an international scandal involving his alleged embezzlement of $700 million.  Two enormous protests have resulted (one anti-government and one pro-Malaysian pride) which have divided the country and brought race politics into the foreground.  And the ringgit is at a 17-year low and is the worst-performing currency in Southeast Asia to date.

Meanwhile, dirty industries are fast-depleting natural resources and poisoning local communities.  These same industries, along with some smaller businesses, are abusing desperate migrant workers and putting the country’s human rights record in the gutter.  A municipal waste problem is piling up, overflowing landfills and further polluting rivers and soils.  And as if to top it all off, fires in neighboring Indonesia have recently choked Malaysia and Singapore with haze, causing school closures, health problems and general havoc.

In times like these, nations have mainly their governments to depend on for help.  Unfortunately the United Malays National Organization (UMNO), Malaysia’s ruling party led by Najib Razak, has been hard pressed to solve the country’s problems.

Some recent government decisions have been lifesavers, like the green technology incentives attracting big-time foreign investment and creating jobs in renewable energy and sustainable construction.  Some of them have been short-sighted, like the unofficial decision to turn a blind eye on dirty industrial practices so as not to interrupt economic cash flows.  Some of them have been downright crooked, like Najib’s firing of his deputy prime minister and arresting of anti-corruption officials as they attempted to uncover the truth of how $700 million of government money made it into his personal accounts.  As good and bad as these decisions have been, one thing has been true of all of them – they are missing the point.

What Malaysia needs most is sustainability.  Social, environmental and economic sustainability.  This is the aim that should be directing government decisions, but in many ways that couldn’t be further from the truth.  The emergent threats Malaysia is facing have distracted UMNO from the biggest issues of environment and society.

Take bauxite mining, for example.  The Malaysian industry has exploded since Indonesia dropped out as China’s main supplier.  The boom has been good for economy, but is saturating the environment with heavy metals and radioactive material.  The problem is completely reversible – sustainable bauxite mining is done all over Australia – but UMNO has been making idle promises to improve regulation.  The government has repeatedly declared that it will shut down mines if pollution doesn’t stop (it’s getting worse) but has recently countered that with the argument that mining is too lucrative to stop.  This is short-term, fear-based logic.  Malaysia was getting along before the bauxite industry boomed, and it would still get along if the industry were slowed down enough to enact some decent health and safety regulations.  But instead of considering the country’s future, Malaysia’s government continues to let communities and the environment unravel, jeopardizing everything for short-term gain.

Consider also the way UMNO responded to Bersih 4.0.  The anti-government rally of over 100,000 people was turned entirely divisive by Najib’s support  of an eyebrow-raising pro-Malaysian pride rally. 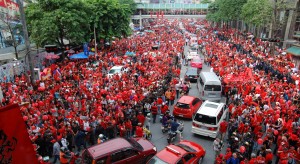 Officially called Himpunan Rakyat Bersatu, the 35,000-strong “red-shirt” rally was billed as a demonstration in support of UMNO.  The event supported the government, but it also ended up drawing a firm line between Malaysians with Chinese heritage and those with Malayan ancestry.  Red-shirted protestors hurled insults at Chinese-Malaysians, carried signs with racially charged banners and placards, and generally turned the focus of this rally from government support to race politics.

UMNO funded buses that brought angry young Malaysians to the rally, practically engineering the event.  There can be little doubt that this was a fear-based reaction by Malaysia’s government to increasing oppositional support.  It’s also not difficult to speculate that a secondary objective was to divert attention from Najib’s involvement in the 1MDB scandal by stirring up racial tensions.  That mission was accomplished, and the resulting disorder has pushed Malaysia further into chaos in a time when it needs unity more than anything else.

Other examples of short-sighted government action abound, and they are all out of alignment with sustainability.  So what is the government to do?  Some would say the counter-argument to all this has was fleshed out in the early 90’s. 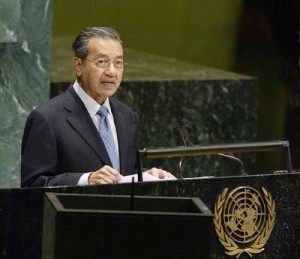 Years ago, a very popular prime minister – a legend in Malaysian politics, really – drafted a document that the whole country agreed upon.  He was called Mahathir bin Mohamad, and it was called Wawasan 2020 (or ‘Vision 2020’).  ‘Wawasan,’ as the document has become affectionately known, was entirely focused on achieving sustainable development for Malaysia.  Its objectives included national unity, liberal values, a focus on education, equitable economy, and environmental sustainability.  Though ‘wawasan’ was a touch idealistic, the objective of sustainability united all of Malaysia.

At present, too much attention is being paid to quick-win economics, and not enough to foundational development.  If Malaysia doesn’t take a step back and start making short-term sacrifices for long-term gain, it could descend into a failed state.  However, if the current period of strife is used as an opportunity to reassess political and environmental goals, to refocus on sustainability and to unify the nation, these trying times could prove to be the turning point Malaysia has been waiting for.