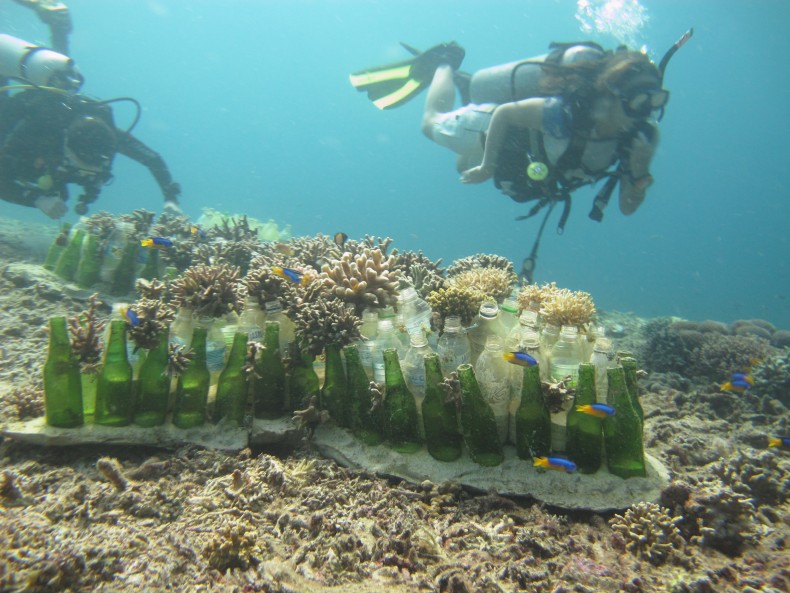 All of Malaysia’s marine environments are beautiful, but among the most astounding are its coral reefs.  Surrounded by warm tropical waters, Malaysia plays host to part of the Coral Triangle.  The Coral Triangle is recognized as the world’s foremost center of marine biodiversity and is a worldwide priority for conservation.  At least 500 species of reef-building corals live here, sheltering more than 3,000 species of fish including the world’s largest (the whale shark), providing habitat for six of the world’s seven marine turtle species, and otherwise supporting a vast array of aquatic life.

Along the western edge of the Coral Triangle sits Sabah, Malaysia.  Sabah’s coast, like much of Borneo’s, is flanked by rich coral reef networks.  These local hotspots for marine life are important – they’re a major food source for coastal communities, they attract tourism which supports the Malaysian economy, and they constitute a unique ecosystem invaluable for its rarity and contribution to ocean research.

Sabah’s reefs are threatened by pollution, ocean acidification and overfishing.  They need protection, and a nonprofit organization focused entirely on marine conservation in Sabah is bent on providing just that.

The Tropical Research and Conservation Center (TRACC) was founded in 2002 by marine scientist and professor of environmental science Steve Oakley.  After traveling the globe and working in 28 countries, Oakley settled in Malaysia in 1986 and promptly fell in love with Sabah.  He taught environmental science for five years in Sabah’s neighboring state of Sarawak, but soon developed a bent for coral reef protection that could not be satisfied from within the bounds of a University.

“When you’re in a university, it’s hard to convince governments that they’re on the wrong track,” said Oakley in interview with Clean Malaysia.  “They’re constrained by budget and policy – we’re constrained by the needs of the environment as we see them.”

Oakley’s dedication led him to start TRACC, and drives the objectives of the organization to this day.  In his own words, “TRACC’s mission is saving the ocean one turtle, one shark, one reef at a time.” 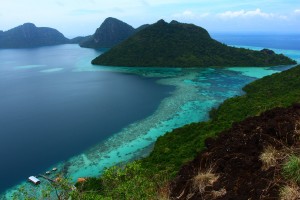 Islands and reef systems of Sabah, Malaysia by Steve Oakley

In Sabah, saving the ocean is not an easy job.  Despite their great value, Borneo’s reefs are being actively destroyed by blast fishing.  Lazy fishermen looking to make a quick buck will shove out early in the morning, eye a school of fish through the placid water and drop an explosive onto it in order to take out the whole group.

What kills fish also results in tremendous coral reef destruction.  According to Oakley, a typical blast destroys a circle between 4 and 6 meters in diameter and kills all fish within 15 to 20 meters of the bomb.

The practice was started in the second world war with Japanese and allied soldiers throwing hand grenades into the sea to catch fish.  Blast fishing is illegal now, but because reef systems grow very slowly, the damage done then is still being felt today.

“Reefs that were blasted in the forties, fifties and sixties are still wastelands, they are still deserts now in 2015,” Oakley remorsed.

This is bad news, but worse is the fact that blast fishing is an ongoing problem.  TRACC has always been aware that some bombing occurs in and around Sabah, but Oakley revealed a recent discovery that proved it to be an even bigger problem than he imagined.

“A reef that we thought had survived the bombing, a reef that was beautiful and living and surviving was devastated by 250 to 300 blasts in the last 12 months.”

The reason fishermen are getting away with this much bombing is that though illegal, blast fishing is very difficult to regulate.  There aren’t many police patrols out at 5am when blast fishermen take to the seas, and perpetrators must be caught in the act for an arrest to be made.  The Guardian published an expose on blast fishing in Sabah in late 2014 calling for community involvement to stop the bombing – it’s believed to be the best and only way to stop the destruction.  Uncoincidentally, that’s exactly what TRACC has been working on.

Spreading awareness about blast fishing and encouraging villagers to report it whenever they can, TRACC has created a protected zone in its little corner of Sabah.

“We’re maintaining an area that is currently protected by us,” said Oakley.  “It’s not protected legally yet, but the local village doesn’t fish this area.  This is an honor code agreement between the village and ourselves.”

The honor code agreement is a profoundly hopeful sign not just for coral reef conservation but for environmental protection of all kinds in Malaysia.  TRACC has proven that through good communication, communities themselves can protect the natural treasures around them.  Oakley didn’t wait for the laws to change, he campaigned locally for the environment, dug out a niche of protection and spread environmental awareness while he was at it.  With some dedication, this sort of relationship could be replicated in other parts of Malaysia and for other important causes.

Another sign of hope has come from TRACC’s most direct method of reversing blast damage – building new reefs.  The process is as simple as it has been effective.

“We mix wet cement, stick glass bottles into it, and plant corals amongst and around the bottles,” Oakley explained.  “It’s like setting up a free apartment complex in the ocean and saying ‘move in!’ and they [the fish] do.  Five years later we’ve got fish that are 70 to 80cm – breeding and reproduction size – that we’re fairly sure we watched grow at this island.”

TRACC’s progress in combating blast fishing is especially impressive considering the simple and accessible nature of the organization.  The “we” Oakley refers to is a rotating team of dedicated volunteers.  From inexperienced students and vacationers to long-time conservation biologists, TRACC sees a wide range of characters and is open to all comers.  The volunteers help Oakley run research projects and conduct survey dives,  he teaches them about marine biology and takes them diving, and the work manifests itself in conservation projects like reef rebuilding and species protection.

“We’re working with Sabah fisheries and the Department of Fisheries Sabah to try and create sanctuaries for sharks,” said Oakley of a recent initiative.

The shark project is making headway, especially because it ties in very closely to reef rebuilding.  Reefs built to counteract blast fishing act as breeding grounds for fish, the fish act as food for sharks, and the sharks – once provided with a food source – can settle into recesses in the built reefs along with the rest of the species sprouting up under TRACC’s watchful eye.  Oakley explains it like this:

The following video, created by TRACC and narrated by Professor Oakley himself, illustrates this point and gives a stunning visual example of how the project is taking root:

The footage is a perfect example of how far a little dedication can go in protecting the environment.  Looking at the bigger picture, this dedication is providing future stability for Sabah and indeed all of Malaysia.

More reefs and more species diversity attract more tourists that fuel the economy.  The protected areas TRACC hopes to establish will also stave off overfishing, which could see coastal communities go hungry.  And the research TRACC is performing, along with its community involvement and dedication to conservation, provide a powerful example of conservation that raises awareness for sustainability and wildlife protection the world over.

If you are interested in learning more about TRACC, more about marine biodiversity in Borneo, or more about volunteering to help save Malaysia’s coral reefs, visit TRACC’s website.