Malaysia’s environment is in a fix.  Its ancient jungles, teeming seas and varied tropical landscapes make it the world’s twelfth-most biodiverse region on the planet, but the nation’s economy has grown from the destruction of these ecosystems.

This hungry economy has seen Malaysia’s beautiful trees, exotic animals and hills full of mineral deposits weather a decades-long assault from the workings of unregulated industry.  Much of this happened before terms like ‘conservation’ and ‘sustainability’ were even fully defined, but old habits die hard and despite legal protections, Malaysia’s environment continues to suffer at the hands of its own expansion.

Along with its industry, Malaysia’s population has exploded in the last few decades – tripling since 1970 from 10 to over 30 million people.  Their consumptive demands further stress the environment, and as the economy continues to mature, more and more of the population flocks to metropolitan centers to live and work.  The built environment has swollen to capacitate this growth, paving over forest, emitting pollutants and driving yet more industrial growth.

These direct impacts have been harsh on the surrounding landscape, but as hard as urban expansion has been on Malaysia, perhaps one of the greatest threats to the environment is the lifestyle that has evolved in its cities. 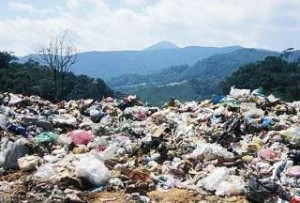 Now one of the most urbanized countries in East Asia, over 50 percent of Malaysia’s population lives in the city.  These urban Malaysians are often isolated from the nature.  A fast-paced lifestyle and industrious culture (Malaysia defines the work week as 48 hours and Malaysians are eligible for full-time employment at 14 years of age) have left little room for environmental awareness to develop.

In recent years, a disposable culture has evolved.  Malaysians now produce about 30,000 tons of waste every day, only 5 percent of which is recycled.  The amount of trash Malaysians produce is rising extremely fast – the average was 22,000 tons per day in 2012 – and the system can’t handle it.  Landfills are overflowing and garbage is sometimes dumped right into rivers or over hillsides.

The following slide show offers a clear picture of the challenges Malaysia is facing when it comes to waste management.

This disposable culture extends to other resources as well.  Water is cheap, so it is used indiscriminately through leaky and inefficient utility systems.  Water reservoirs hit record lows this year in Malaysia as a result of dry weather and this imprudent usage.  Some farmers cut corners by burning land to clear it, resulting in massive forest fires that scourge the land and pollute the skies.  Fishermen are known to use bombs to kill fish, taking out kilometers of ancient and environmentally critical coral reef habitats in the process.  The list goes on.

Many educational programs and initiatives encouraging sustainable values have been launched by the government, but they have by and large been trampled flat by the pace and culture of life in Malaysia.  This is because Malaysia’s adult society has developed with the ideas that natural resources are plentiful, that no one can make a difference for the environment, and that the main thing to worry about is providing for oneself and one’s family in whatever way possible.

It’s an outlook that has yet to catch up with Malaysia’s environmental state of emergency.  Unfortunately, it has proven difficult to change.

“It’s a law of nature, it’s impossible to change a person from their traditional ways for many years,” said Malaysian environmentalist Bernard Eng in interview with Clean Malaysia.  Eng was speaking of his years’ experience leading environmental community activities and participating in events and speeches.

“It may take a generation or two to change those unsustainable habits,” he continued.  “Malaysia is just starting to pick up that stitch and increase awareness about the environment.”

Eng’s experiences with adults reflect a challenge for Malaysia, but his occupation reveals a great opportunity.  Eng helps lead Eco Warriors Malaysia, one of many environmental organizations in a movement that is growing throughout the country.

Despite (and perhaps because of) the state of Malaysia’s environment, community-led environmental conservation outfits are starting to pop up.  These aren’t one-off corporate social responsibility seminars.  They aren’t government programs that burn out in a short-lived blaze of taxpayer-funded glory.  They are organizations by and for Malaysians who want to see their country become green and are willing to make it happen themselves.

The movement is still growing, but its players are dedicated and expanding quickly.  A few examples are  EcoKnights, which is regenerating public spaces and holding eco film festivals and furthering the discussion of sustainability in Kuala Lumpur, 350.org Malaysia which is fighting climate change across Malaysia and MESYM, which is an environmental awareness website platform connecting youth to many more organizations and events.

Eco Warriors Malaysia is an especially good example.  Led by Bernard Eng and founder Matthias Gelber, it has been gathering momentum in Pahang for seven years now.

“It’s not an NGO, it’s basically a community movement,” said Eng of the project.

‘Community movement’ describes Eco Warriors quite aptly – the group survives entirely off of donations.  It’s not a legalized entity and can’t qualify for grants or organized funding, yet it has led hundreds of tree plantings and enjoys a steadily growing number of invested participants.  The following video of Eng and Gelber outlines some of Eco Warriors’ other initiatives.

All of the components mentioned in the video have been successes – especially the youth camping trip Matthias and Bernard were excited about.  Eco Warriors ended up successfully crowd-funding the project and just filled registration for what has become the Eco Leadership Program, a 3-night, 4-day nature connection and sustainable education trip through the Taman Negara National Park.

Eco Warriors has been enjoying this kind of success more and more often lately.  The organization’s Facebook group has nearly 6,000 members, and Eng is seeing new faces at every event.

“Eco Warriors has grown from person to person here,” noted Eng.  “The majority of members are new, and many are young people.  We want to be able to encourage youth, get them inspired with mother nature and help them become eco leaders.” 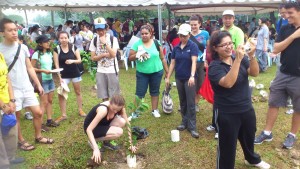 Eco Warriors’ focus on youth is no coincidence.  A 2015 survey of almost 1,000 Malaysian youths between ages 18-34 concluded that “respondents in general have high knowledge pertaining to issues related to the environment.”  The youths “also showed good attitude towards the environment,” and 78% of them wanted to learn more than they knew already.

“As a society, we need to work together with young people and give them more chances to create and invest their fresh ideas in the city, as they are the ones who know the needs of society nowadays,” Haselmayer said.

Indeed, Malaysia’s younger generation is on track to become a powerful driving force for sustainability.

A Younger Generation Poised for Change

‘Youth’ makes up a large portion of Malaysia’s population – almost half of it, in fact.  Index Mundi’s 2014 demographic profile of Malaysia revealed that 45.7 percent of Malaysians are under 24 years old.  These youths are also increasingly well informed.  A 2012 survey of Malaysian youth opinion found that 48% of Malaysians between 17 and 35 years old read newspapers every day.  That number was up from 39% in 2007.  Youth who watched television for information daily also rose from 52% in 2007 to 74% in 2012.

These statistics are backed up by the experiences of Daniel Quilter, another environmental leader in Malaysia.  In addition to being involved in Eco Warriors, Quilter is the founder of Ecoteer and Fuze Ecoteer, two companies working with youth to protect wildlife, conserve nature and teach sustainability in Malaysia.

“We work with primary school kids, doing an environmental program every week,” said Quilter.  “We just started this great program called Roots and Shoots.  We ask the children to look at their environment and ask them questions – what’s wrong, what do you like, what don’t you like about your town, etc.  They’re just 10 years old, but they’re bright!  They know what’s going on.”

Already the program has had success with an anti-smoking campaign.  Village kids came up with the idea themselves – they walk around approaching older children who are smoking and offer them a sweet to eat instead of their cigarette, also educating them on the negative effects of smoking. 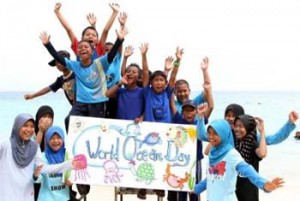 Ecoteer and Eco Warriors Malaysia have many such projects under their belts.  Their specific objectives and activities are different, but their aim is the same – to empower Malaysian youth to make a difference.

“I really want the participants to realize that yes, anyone can do it,” Quilter said of his objectives with Ecoteer.  “They have the support from us and they have support from Eco Warriors.  It’s not easy to stand up and do something, but I want the participants to go home and actually start thinking about what they can do, what’s possible for them.”

This is an important objective.  Empowerment seems to be the only sticking point with Malaysia’s youth.  That 2012 national youth survey revealing such positive outlook and excitement in youth about the environment also revealed that only 39% thought they could make a difference in solving problems with their communities.

“They don’t always have a platform to ignite their passion,” Eng said in agreeance with the survey.  “You see the problem, it’s not just about inspiration, if the kids don’t have a platform to stand up and say what they believe in, they can’t make a change.  We want more eco leaders to stand up, to be brave, to know they can make a difference and to make it happen.”

Eco Warriors, Ecoteer and the host of other community-led environmental organizations across Malaysia are making this possible.  They’re tackling the problem of youth empowerment head-on, educating youth about sustainability, inspiring nature connection and creating direct positive impacts on the environment.

Malaysia’s natural world may be under stress now, but its future is starting to look very green.  The economic, social and political problems Malaysia is experiencing all beg for sustainable development, and according to Eng, Gelber and Quilter (and a number of national surveys), that is just what the younger half of the country’s population is bent on giving it.