New Consequences of Littering in Malaysia 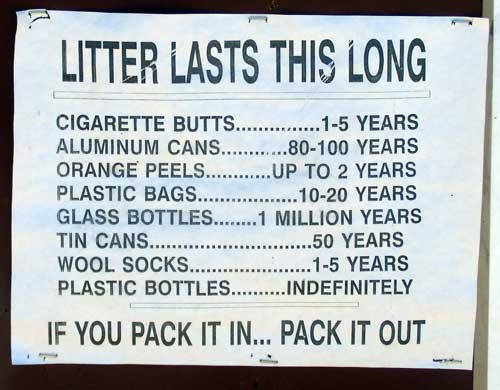 Litter is a big problem in Malaysia, and it could have long-lasting consequences. Photo Credit BeenAroundAwhile via Wikipedia

A famous forest park in Malaysia’s Cameron Highlands was recently forced to close because of an excessive accumulation of litter.  Park tour guides were understandably upset about the closure of Mossy Forest park, their main source of income being that tourist attraction.  This kind of littering is common in Malaysia, and the problem is but one factor in the national issue of poor waste management.

Illegal dumping in the countryside near the park is degrading the scenic properties of the Cameron Highlands.  This takes a toll on the larger tourism scene there and results in environmental and health problems.  A recent review of the Highlands from Tripadvisor.com says it all:

“We came to CH (Cameron Highlands) today driving from Ipoh.  I was in shocked the whole few hours on the way. Land disruption, filthy river, disgusting landfill-like land everywhere.  I couldn’t believe what we saw and am now considering leaving straight tomorrow morning.  I’m absolutely stunned by how polluted and ruined it is.”

Beyond tourism and the Cameron Highlands, littering in Malaysia has proven not only pervasive, but near-impossible to stop.  The Malaysian Plastics Manufacturers Association funded an $188,000 public education campaign aimed at reducing litter in 2012, but the litter problem is alive and well in 2015.  Despite fines for litterbugs, fines for store owners who don’t provide bins in front of their stores and litter patrols by police, Malaysian city streets are still cluttered with trash.  Seberang Prai, several hours north of Kuala Lumpur, has resorted to ‘shame tactics’ in which signs labeling litterbugs as being “stupider than monkeys” after warnings, fines and closed-circuit cameras failed.

The problem of waste management in Malaysia is reaching a critical point.  The amount of trash created is overflowing landfills, and the failure of citizens to put it in a recycling bin – or any bin at all – is frustrating the problem.  Of 126 rivers in the Cameron Highlands, only 8 can now be qualified as healthy thanks to littering.  Three of them are so polluted that they are unsuitable for use even after treatment.

Landfills are creating soil and air pollution, piles of garbage are repelling tourists, and costly attempts to control waste are a drain on government resources and the nation’s economy.  The closure of Mossy Forest Park is a sign that, moving forward, waste management should be a big-ticket issue for Malaysia.