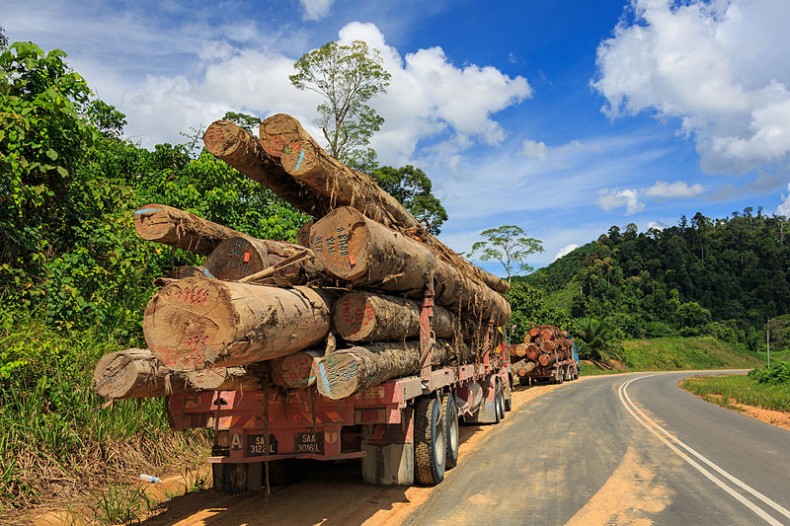 Legally dubious logging - and lots of it - is being conducted on the site of a proposed Geothermal Power Plant. Photo Credit: CEphoto, Uwe Aranas via Wikipedia

After the discovery of geothermal surface manifestations in a 50 square-kilometer area near the town of Tawau, it was determined that the area had the potential to host a geothermal power plant capable of producing up to 67MW of green energy.  If completed, the project is expected to offset around 200,000 tons of CO2 emissions per year of its operation, create jobs, inspire the construction of training facilities and alleviate dependence on fossil fuels and imported electricity.  Project completion would be great news for Malaysia – but the enterprise seems to be stuck in a land clearing phase that has drawn on suspiciously long.

Though significant logging activity has been observed at the site of the geothermal plant, no real construction appears to have started, and the amount of land clearing ‘required’ to proceed with the project keeps growing.

In a stakeholder meeting in 2011, project director Andrew Amalados was quoted saying that the “area leased to this project is only 2 to 3 acres for the powerhouse itself. A further 30 acres is being leased to cover the geothermal wells and associated piping”.  Last August, Assistant Minister of Tourism, Culture and Environment Pang Yuk Ming stated that some 400 hectares (almost 1,000 acres) of forest need to be cleared.  Around 150 hectares have already been logged.

“We have no objection against any genuine power generation company, whether locals or foreigner, to develop the first geothermal power plant in Tawau,” Chan continued, “However, any kind of cronyism involved in the project, from negotiations to awarding, between the owners and government, is unacceptable as it totally contradictory with the obligation of transparency.”

Project managers and government officials involved with the geothermal power plant have lately been sidestepping questions about logging.  As the amount of land logged – which is located in the middle of a first class forest reserve – continues to grow, and project development stagnates, it’s looking more and more like this project is no longer on the up and up.  What started as a geothermal power plant may have devolved into a backdoor logging deal.  If so, it’s a sign of the level of corruption in Malaysia, a dark spot on the reputation of Sabah’s Government, and a wake-up call to the rest of the world that illegal deforestation in Malaysia is alive and well.