Another Mining Wasteland Planned for Sabah? 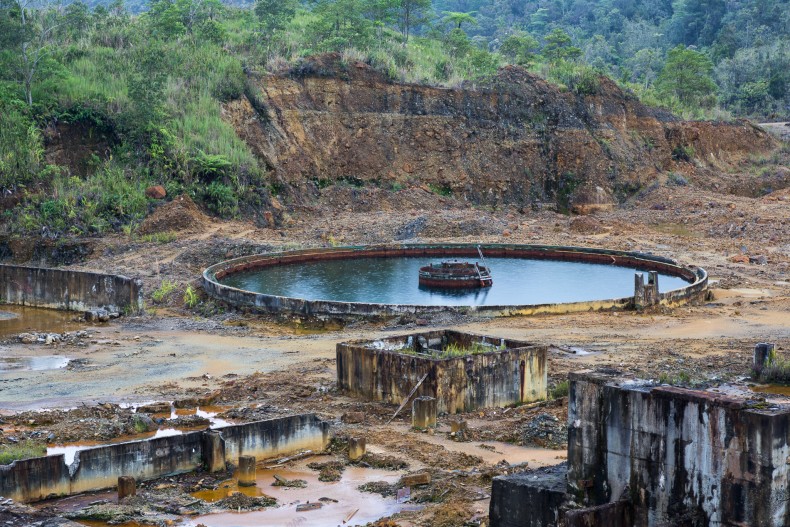 The Mamut Copper Mine, an environmental disaster that yielded proportionately pitiful gains, might be replicated in a newly proposed gold mine. Photo Credit: CEphoto, Uwe Aranas via Wikipedia

A gold mine that could come to dominate 1,000 hectares of protected forest in the Eastern Malaysian state of Sabah has been proposed, and is now under revision.  The idea has excited a government hungry for development, but doubtless brings back memories of environmental catastrophe for the majority of Malaysians.

The new mine, proposed in early 2015 by Southsea Gold Sdn Bhd, is gunning for a large site in Sabah’s Mount Wullersdorf area.  The proposal immediately drew urges from liberal political figure Chan Foong Hin for local residents to write in letters of concern – likely because the only other major mining operation to take place Sabah resulted in disastrous water contamination via acid mineral drainage, a rehabilitation bill of at least RM200 million (US$46.6 million), and a 4,800-acre wasteland.

The Mamut copper mine, as the ill-fated operation was called, operated between 1975 and 1999 but casts an angry shadow that will linger on for many years.  The estimated cost to treat the acid mineral drainage (AMD) that resulted from the mining is RM185 million, and the rehabilitation will take at least 10 years.  Given Mamut’s failure, it’s easy to understand why another mining proposal isn’t overly popular.

The Sabah government has claimed that it will carefully deliberate the new mining proposition and all of its possible environmental consequences, but even if water contamination were minimized, the proposed mining area straddles the Mt Wullersdorf and Ulu Kalumpang Forest Reserves, which are habitat for the endangered orangutans, Malay civets and other wildlife.  Their forest homes would necessarily be uprooted and dug up for the open-pit surface mining that is to take place.

“Of course, the proposed project might bring development to Tawau as economic activities diversify and new jobs opportunities are created,” said DAP Sabah Vice Chairman Chan Foong Hin in February.  “But we are concerned with the environment as well.  Balance between economic development and environmental impact should be made.”

Regardless of this wariness, it is not likely that any amount of consideration could mitigate another open-pit mine in Sabah.

Sabah’s Tourism, Culture and Environment Minister Datuk Seri Masidi Manjun admitted in a recent State Assembly sitting that the cost of rehabilitation for the Mamut copper mine is about equal to the profit made by the Government during the time the company was in operation.  The new proposed gold mine is smaller and would likely face an even more embarrassing ratio of environmental detriment to monetary gain.  The hope is that Sabah’s Government will act with the public’s best interest in mind, and the reality is likely that another mine is not in that interest.