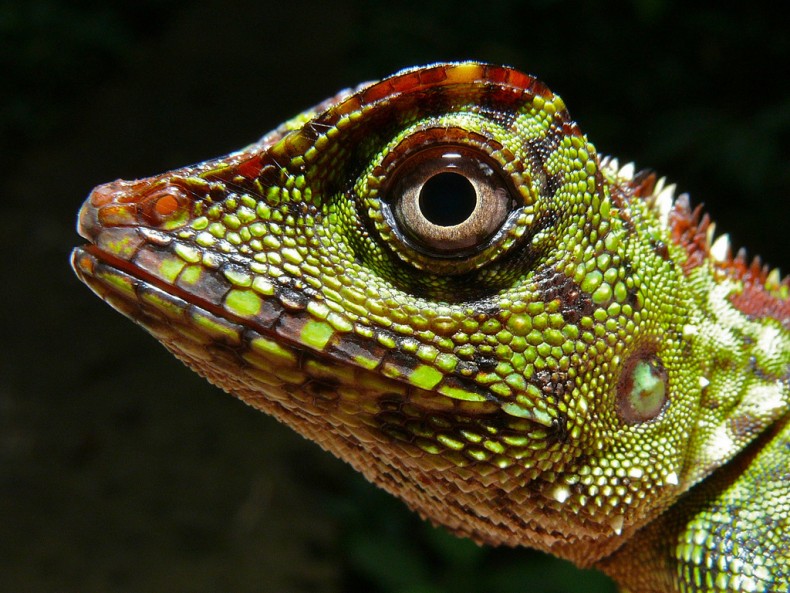 The SAFE project is hard at work determining what effects palm oil deforestation has on species like this Borneo Forest Dragon. Photo Credit: Bernard DUPONT via Flickr

One of the largest ecological experiments in recorded history is being conducted in Sabah, Malaysian Borneo.  It has to do with three hot-button issues – palm oil, deforestation, and biodiversity – and it hopes to find a way to point them all in the direction of sustainability.

Launched in 2010, the Stability of Altered Forest Ecosystem (SAFE) project is essentially a quest to find out just what happens to wildlife when you fragment its habitat and/or transform it into a monoculture of oil palm trees.  Fragmentation is exactly what’s happening at the site of the experiment, a plot of land slated for conversion to oil palm plantation.  Indeed, thanks to a palm oil industry driven by demand for use in everything from cakes to cosmetics, forest fragmentation is happening in most of Malaysia and Indonesia.

We know forest fragmentation is bad for wildlife – animal populations in small chunks of forest simply don’t have access to a large enough gene pool to survive in the long run.  But forest fragmentation and palm oil deforestation are near-impossible to stop, so we want to know more about how to minimize the toll this destruction takes on biodiversity.

“Everyone thinks they have an idea about quite how bad oil palm is for biodiversity but we don’t actually know,” says scientific coordinator Dr Ed Turner, of the University Museum of Zoology, Cambridge. “The question for us to answer is whether you may be able to maintain rather a lot of biodiversity by maintaining large fragments [of natural habitat] or whether it might be better to have those fragments dotted around the landscape.”

A huge range of species from giant trees to orangutans to tiny insects are being studied as part of the experiment.  In fact, the SAFE project is essentially two experiments – one about forest fragmentation and wildlife, and one about what happens to water systems when you remove the trees around rivers, combining the work of hundreds of scientists collaborating to observe, collect and combine data into a picture of what’s going on.

Believe it or not, the project is still in its early days after five years of operation.  Many significant discoveries have already been made – new populations of endangered species, climate change conclusions, how much soil erosion is occurring thanks to palm oil plantations, and guesses as to how long a logged forest takes to recover – but the most important information is yet to be revealed.  If you’re interested in learning more, check out our article on SAFE’s 5 year review!