Meet the Pangolin: A Sign of the Times in Malaysia 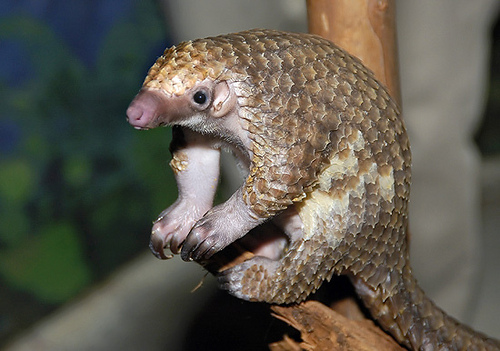 This baby Pangolin is one of the few remaining in Malaysia. Photo Credit: Ruslan Rugoals via Flickr

Covered in scales, feasting on ants, and hanging from trees like a living pine cone, the Pangolin is without a doubt one of the world’s most unique mammals.  Ranging from 12 to 39 inches in length, these housecat-sized creatures are actually the only known mammal in the world to have adapted a protective coating of scales and for this reason are objects of curiosity.

Unfortunately, Pangolins are also objects of desire.  Their meat is considered a delicacy in China and Vietnam, their scales are believed to have medicinal qualities, and though protected by an international ban on their trade, the creatures are often trapped and sold as pets.  Combined with habitat loss, the resultant poaching and trapping has pushed most pangolin species to the brink of extinction.

Increasing threats have incited increased attention from conservation organizations around the world, including the global cooperative on animal protections called CITES.  In July 2014, Pangolin protection made an especially big splash at the 65th meeting of CITES Standing Committee.  India, Indonesia, mainland China and Hong Kong all reassured CITES of their efforts to stop Pangolin trafficking and called for more in-depth reporting on conservation efforts.  These countries are to be lauded for their efforts, but noticeably absent from their number was Malaysia.

Malaysia’s pangolins are perhaps in more need of protection than those in any other country.  Malaysia’s Sunda pangolin (Manis javanica) is classified as Critically Endangered by the IUCN Red List of Threatened Species.  Corruption and poorly enforced wildlife regulations make it easy for poachers to catch Pangolins and traders to ship them out or transfer them from one country to another.  Just this September, a trader so brazen as to openly sell Pangolins on the street was reported.

The situation is an obvious call to action for Malaysia’s wildlife enforcement.  In fact, it’s a wake-up call to the state of environmental protections in general in Malaysia.  If deforestation and illegal animal trading in Malaysia are allowed to continue as they do now, the country stands to suffer mass species extinction, further environmental degradation, and eventual social and economic destabilization.

Improvement on all this could start with better Pangolin protection, and with CITES 66th meeting of the standing committee coming up in January 2016, an opportunity to take action is at hand.  Building on the momentum of last year’s meeting, CITES should focus on Pangolin protection, but this time in Malaysia.  The fate of Malaysia’s Pangolins – and the larger fate of the country’s future – must be taken more seriously.