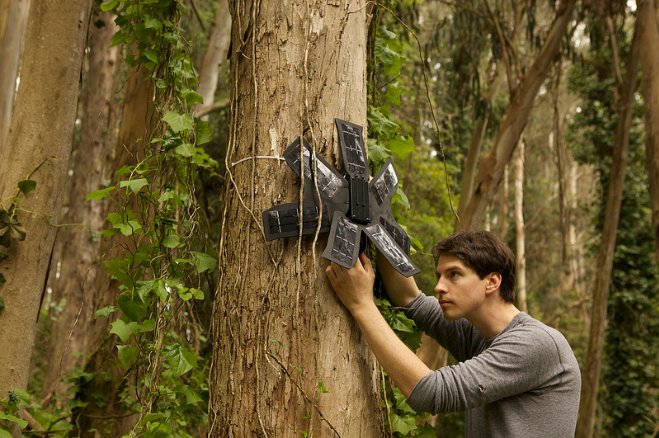 A young California physicist and digital engineer has found a way to catch illegal loggers and poachers in the act. Photo Credit: Nature Connection

The idea started in 2011 when California tourist Topher White stumbled across a band of illegal loggers during an eco-vacation in Borneo.  White had been staying at a gibbon reserve on some 40,000 hectares of protected forest where, even though guards were posted to stop illegal loggers, White’s tourist group caught some of them in the act less than 5 minutes’ walk from the reserve’s main compound.

The problem underlined by this situation is a persistent one – loggers and poachers are extremely hard to catch in large, dense, jungles.  The solution White came up with was quite clever – use discarded cell phones to create sound traps that, when set up in the jungle, can pick up the noise of chainsaws and gunshots and send instant alerts to forest protection authorities nearby.

White took his idea to task and launched an NGO focused on building these traps called Rainforest Connection in early 2013.  The first thing the company did was to prove the effectiveness of its sound traps.  They did so in Sumatra, using them to catch loggers and poachers in the act.

Effective, scalable, simple and relatively cheap, this innovation could be the last hope for our world’s surviving rainforests.  If White’s project continues to grow, it could be brought back to Borneo and the rest of Malaysia to save the beautiful natural environment in which it began.  Support Rainforest Connection if you can – it could end up supporting all of Malaysia.