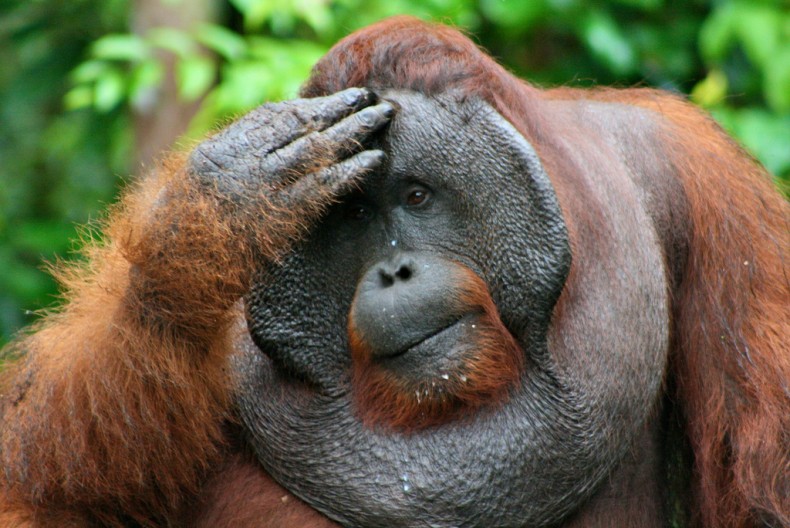 The cost of Indonesia's fires has been as severe for Orangutans as it has been for humans. Photo Credit: CIFOR via Flickr

The terrible costs of the massive forest fires currently raging through Indonesia are most often calculated in tons of CO2 emitted, acres of tropical forest destroyed, human suffering and economic loss.  These factors are indeed great, but there is another victim of this circumstance – the endangered Orangutan.

Borneo, an island territory shared by Indonesia, Malaysia and Brunei, is home to most of the world’s Orangutans.  The entire landmass has been blanketed by choking smoke from the fires, and it is wreaking havoc on the estimated 20,000 orangutans that live there.

Untold numbers of Orangutans are being forced to flee their habitats either due to direct destruction by fire or choking smoke that has reached a deadly concentration in some areas.  They’re fleeing their forests and showing up in farms, backyards and driveways.  Staff at Indonesia’s Borneo Orangutan Survival Foundation (BOSF) have had to set out, find the displaced apes and tranquilize them in order to rehabilitate them.

Not unlike humans, the orangutans most at risk are the old and very young.  BOSF in Indonesia has already treated 16 baby Orangutans for smoke inhalation.

“They get flu, cough and diarrhea, and without intervention they collapse in one or two weeks,” said Monterado Fridman, a member of BOSF.

Orangutans, already considered endangered, will face a tougher time than ever surviving in a world lighting up with fires and choked by smoke.  In BOSF’s conservation area alone, the area engulfed by fire is at 15,442 hectares and increasing.

This sampling of the cost to Borneo’s wildlife can only be a tiny sliver of the total cost to the island’s biodiversity, and the cost to biodiversity is an even smaller slice of the cost to tropical forest cover, human health and global climate change.  The fires have so far devastated over 3 million hectares of forest, constituting a man-made environmental catastrophe of epic proportions.  It’s a wake-up call to Malaysia, Indonesia and the world that these tropical habitats are drastically important not only to the continued environmental and economic sustainability of the countries involved, but to the future stability of our planet’s capacity to support life.