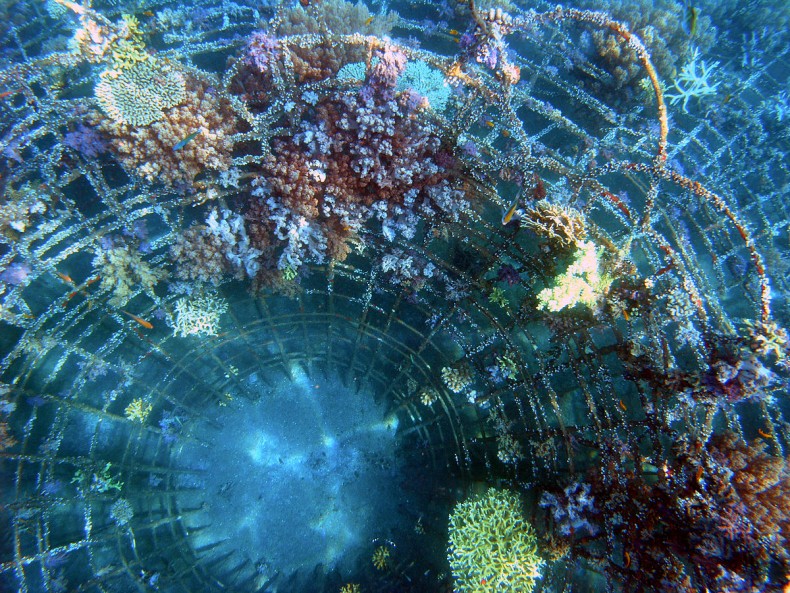 A technology encouraging coral reefs to grow back faster than their normal (agonizingly slow) rate is being implemented across the world, reviving invaluable but threatened ecosystems and bringing some of them back from the dead.

The science and implementation of Biorock is relatively simple, but the results are amazing.  First, a wire-like framework of metal bars is built.  It can be any shape (and there have been many artistic experiments over the years) but as long as it is conducive to reef growth, it will work.  The framework is then installed in the desired reef area and then electrified with a steady but low voltage.  This voltage is the key – it draws elements out of the water that collect onto the bars, forming a stone-like substance as strong as concrete.  The “living rock” grows around the bars at up to 5cm per year, creating an ever-stronger structure that can even “heal” itself if it is damaged.

The true genius of Biorock is that, simply put, it’s good for marine life.  The stone-like substance contains high levels of dissolved oxygen.  This allows faster reef growth and makes it attractive to fish and other marine organisms.

Invented by architect and marine scientist Wolf Hilbertz and marine biologist Thomas J. Goreau, Biorock has actually been around for some time.  It has its root in Hilbertz’s 1970’s experiments, and has been refined and increasingly implemented since the 1990’s.  An installation in the Indonesian Maldives occurred during a period of great ocean warming.  Fewer than 5% of the natural reef corals survived, but an astounding 80% of biorock reefs in the area not only survived, they flourished.

This technology could be of particular use to Malaysia’s reefs. There are at least 435 different corals and over 500 species of fish within Malaysia’s marine ecosystems, but they are threatened by blast fishing, overfishing, ocean pollution, temperature rise and coastal development.  Not only do these reefs contribute to marine biodiversity, but economy through tourism and food security through acting as breeding grounds for fish that are seafood staples.  So far, the only major Malaysian installation is at Tiaman Island.  It’s a step in the right direction, but Malaysia’s coral reef conservation could use a lot more jolt from Biorock.