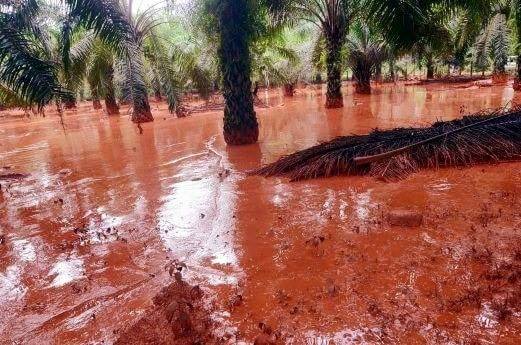 Thanks to poorly regulated mineral mining and transportation, the spread of bauxite dust through the air and water may already be contaminating water supplies in Malaysia with arsenic, mercury, aluminum and other toxins. Photo Credit: GERAM

Bauxite mining in Malaysia – and the heavy metal contamination it sews across land, air and water – is coming under increasing scrutiny as its industrial activity causes more and more public and environmental health problems.

The latest in a series of worries including cancer risks, economic upset, groundwater corruption and river fouling is the contamination of drinking water for residents near bauxite mining operations.

A member of parliament representing the port town of Kuantan – a major hub for bauxite mining and shipping – has been digging into the problem, hoping to ease the woes of those living in her now heavily polluted city.  Her name is Fuziah Salleh, and her investigations may have revealed that drinking water in nearby towns has already been compromised.

The villages of Bukit Sagu and Bukit Goh sit atop reserves of bauxite.  Contractors have done everything they can to mine the mineral as quickly as possible, and the hasty process causes great clouds of dust containing arsenic, lead, aluminum and other toxins to spread over towns, roads and countrysides.  According to Fuziah, raw bauxite ore is apparently now being washed near rivers, allowing runoff to flow directly into the water supply.

Potentially worse than the aluminum this releases is the presence of mercury in bauxite ore.  High levels of mercury – higher than allowable levels for irrigation water – were recorded in rivers around Kuantan and surrounding villages back in August.  There’s no telling how high these concentrations are now, but the risks to human health are undoubtedly severe.  Ingestion of mercury in small amounts can cause birth defects, and intake of larger amounts over time can cause cancer, burning or itching skin, sensory impairment (vision, hearing, speech), disturbed sensation and a lack of coordination.

Fuziah has asked that the Health Department sample the water quality of rivers near Bukit Sagu and Bukit Goh.  No action has yet been made.