Malaysia’s Trees could be Worth $2.4 Trillion (If They’re Kept Alive) 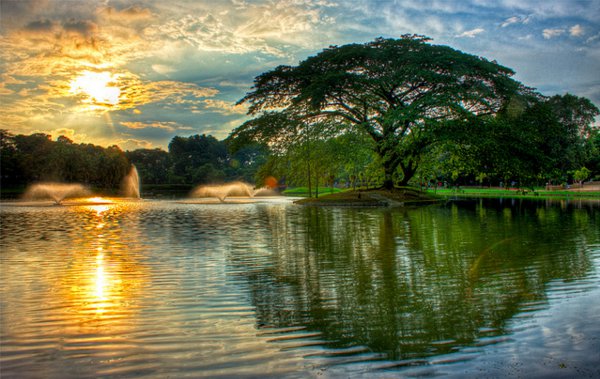 About 60% of Malaysia is covered by forest.  Though the country’s woodland environments have suffered mightily at the hands of short-sighted industrial, agricultural and urban development over the past several decades – Malaysia once enjoyed almost 100% forest cover – the trees remaining provide much to the nation.  The benefits trees and forests provide are many and varied, making an estimation of their value quite difficult, but a recent study in the UK has put the importance of Malaysia’s forests into perspective.

An exhaustive report undertaken by consultancy group Europe Economics just estimated the dollar value attached to trees in the UK.  Through providing flood reduction and public health benefits while decreasing air pollution, trees and woodlands in the UK provide a $407 billion value to the economy.

In a world where economic growth often comes at the cost of natural environment, it is vitally important to put a price tag on nature.  In many ways, our economic systems operate in a financial vacuum that doesn’t take the planet’s life-supporting functions into account.  When natural systems are valued economically, their critical importance to world economies are made obvious in a way that businesses cannot ignore.

The environmental-economic disconnect is the root problem of our world’s environmental crisis, and nowhere is it playing out more dramatically than in places like Malaysia.  If Britain’s approximately 3 million hectares of forest cover are worth so much, it is hard to conceive of the unimaginable worth wrapped up in Malaysia’s estimated 18 million hectares.

A straight comparison by area would put the dollar value of Malaysia’s forests at six times that of Britain’s: a jaw-dropping $2.4 trillion.

However, woodlands in the UK were valued for their flood prevention, health benefits and improvements to air quality.  Malaysia suffers from far worse flooding – its low coastlines and undeveloped seaside communities at much higher risk for climate change-induced floods, storms and accompanying infrastructure damage.  And Malaysia’s air quality is far worse than Britain’s – the country suffers haze epidemics (from fires that destroy more valuable forest) every year, the most recent of which will cause over 100,000 premature deaths.  With these things considered (let alone the magnificent biodiversity present in Malaysia’s rich tropical forests), it is almost certain that trees in Malaysia provide more benefits to their country than do trees in the UK.  The great likelihood is that, pound for pound, Malaysia’s forests are worth much more than Britain’s.

Putting the proof in dollars and cents makes it obvious that Malaysia’s rampant deforestation is undercutting the country’s future.  For every dollar earned by palm oil producers, mining operations or logging companies, many more are lost through environmental costs like floods, soil erosion, air quality degradation and public health decline.