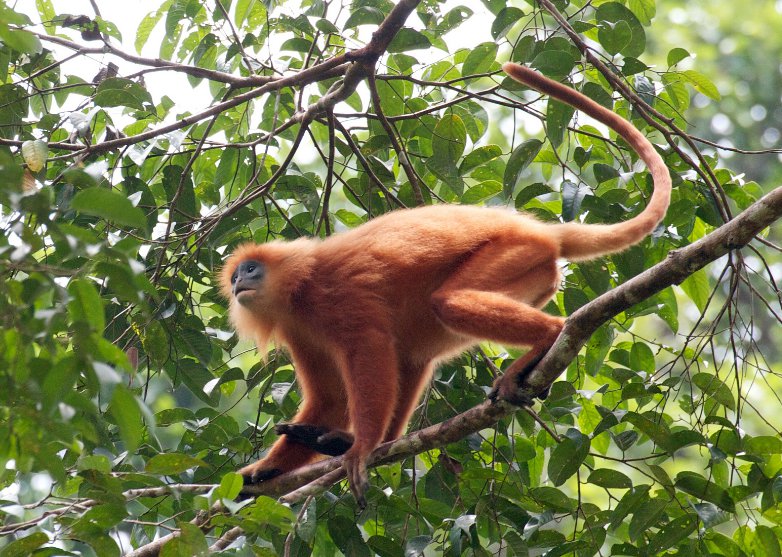 The Maroon Langur, also known as the Maroon leaf monkey, is a threatened primate species endemic to the island of Borneo.  Of medium size and rusty red color, they swing from tree to tree feeding on leaves, seeds and fruits.  Their appetites are quite exploratory – they may sample more than 100 plant species during a year.

Entirely arboreal (living their whole lives in treetops), these monkeys roam the forests of the Malaysian state of Sabah and parts of the state of Sarawak.  They’re a prime example of Malaysia’s thriving and diverse wildlife, but unfortunately, also serve as an example of how this wildlife – and the environments supporting it – are being threatened by deforestation and habitat destruction.

The Maroon Langur shows a distinct preference for primary (never-cut) forests and peat swamps.  Both of these habitats are shrinking fast in Malaysia.  Along with urban development, industries like logging, palm oil and rubber continue to cut into Malaysia’s primary forests.  As these Maroon Langur habitats shrink, so does the capacity of Malaysia’s trees to clean polluted air, to regulate weather patterns, and to hold onto irreplaceable topsoil that otherwise gets washed away by monsoon rains.

The peat swamp forests favored by Maroon Langurs are especially big targets for palm oil companies.  Their fertile soil can produce large quantities of high-yield oil palm trees, but when drained of excess moisture and converted into plantations, they become extremely flammable environments.  Peatland palm oil fires release copious amounts of CO2 stored in trees and peat soil, and can burn underground as deeply as three meters underground.  Slash and burn farming techniques are not uncommon on peatland oil palm plantations, and are what started 2015’s palm oil fires, which were the worst in recorded history and at their peak released more CO2 per day than the entire US Economy.

The Maroon Langur, the forests of Malaysia, and the future of the country’s environment and sustainability are inextricably linked.  The survival of one means the survival of another, and they all must be kept alive in order for Malaysia to hope for a secure future.