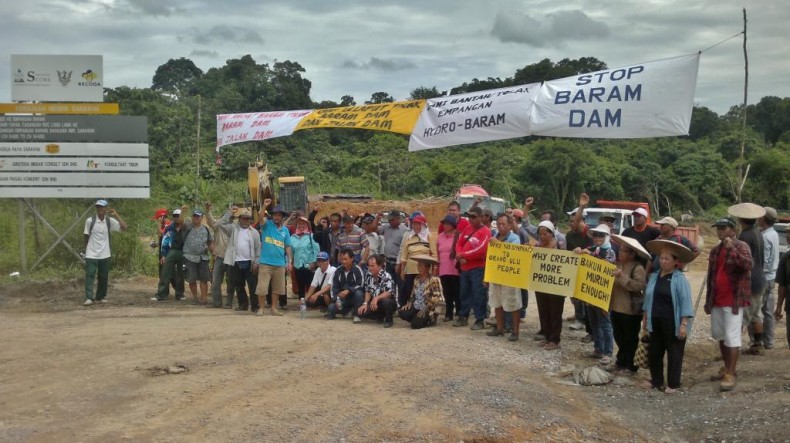 The successful Baram Dam blockade was one among several crucial environmental and human rights projects supported by SAVE Rivers. Photo Credit: International Rivers via Flickr

SAVE Rivers, a community organization aimed at protecting the people and mega-diverse ecologies surrounding rivers in the Malaysian state of Sarawak, has just been recognized for its social and environmental efforts.  Awarded the nationwide accolade for civil society organizations, SAVE Rivers will take home RM 5,000 (US $1,152), and a lot of respect.

In 2008, Sarawak unveiled a plan to build 12 enormous hydroelectric dams in order to meet energy demand for future industrial development.  Recognizing that each dam would flood thousands of square kilometers of pristine tropical habitat, displace tens of thousands of villagers living on and around the rivers planned for damming, and produce much more energy than the state could ever feasibly need, SAVE Rivers was founded to support opposition to the dams.

SAVE Rivers has supported blockading and peaceful protests of numerous dams, and has recently achieved a great victory.  The Baram dam – which would have flooded 400 square kilometers of jungle, destroyed 1 million birds, 35 million mammals and 28 million trees, and displaced 20,000 people – was just put on hold until further notice thanks to two years of protesting and construction site blockading supported by SAVE Rivers.

The victory suggests that SAVE Rivers may be successfully turning the tide on the entire 12-dam project.  Through a long and hard fight against poorly-planned industrial and governmental design, SAVE Rivers has made a powerful stand for the environment and human rights in Malaysia.  The national accolade for civil society organizations couldn’t be better deserved.