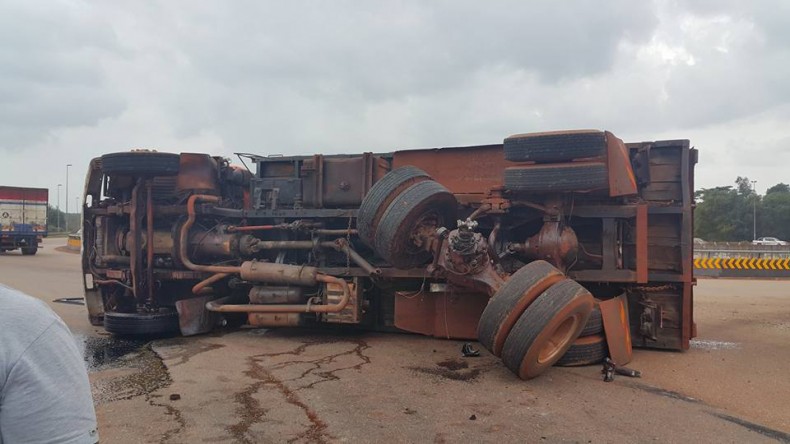 It appears that Malaysian communities suffering under waves of pollution, industrial takeover and governmental inaction thanks to a surge of irresponsible bauxite mining have finally hit the breaking point.  Five lorries (trucks that blow through towns leaving large clouds of bauxite dust in their wake) have been set afire by members of the public in the last month.

Malaysian assemblyman Andansura Rabu brought this information to light in a recent government meeting.  The situation is dire and the violence terrible, but the citizens of Pahang, the Malaysian state producing by far the most bauxite in the nation, have not acted without reason.

Cancer risks, drinking water contamination, dangerous roads, a haze of heavy-metal laden dust and severe environmental destruction have been plaguing cities near bauxite mining operations for about a year now.  Over 2,400 residents of bauxite hotspot and port town Kuantan recently signed a petition demanding better industry regulation, but because of how lucrative the industry is, governments have been unresponsive to this and other public outcries.

Members of the public are trying to get the government’s attention, and they have done so most recently by burning five of the trucks running bauxite through their homes.  In just the last nine months, 24 accidents involving bauxite lorries were recorded in Pahang, two of them being fatal.  The trucks also spread a film of toxic dust over streets and cities and clog up highways with traffic, but the big picture consequences are far more frightening.

Malaysia could be looking at die-offs of aquatic species, generations of cancer-ridden communities, a tremendous loss of topsoil and, even as immediately as in the next few months, mudslides caused by monsoon rains on open-pit mining in hilly areas.  If bauxite mining in Malaysia isn’t regulated now, it could be too late to avoid these consequences.

The rationale behind the government’s inaction has remained the same since February 2015 – essentially, that bauxite mining is too lucrative to shut down.  Government officials argue that too many Malaysian workers are relying on income from bauxite to stop the mining, but the price Malaysia will pay through public health and environmental reparations will almost undoubtedly be higher than whatever short-term revenue bauxite mining brings.  Malaysian governments should take the burning of five bauxite lorries for what it is – a loud and clear message that the social and environmental fabric of their country can no longer stand the bauxite mining currently in progress.