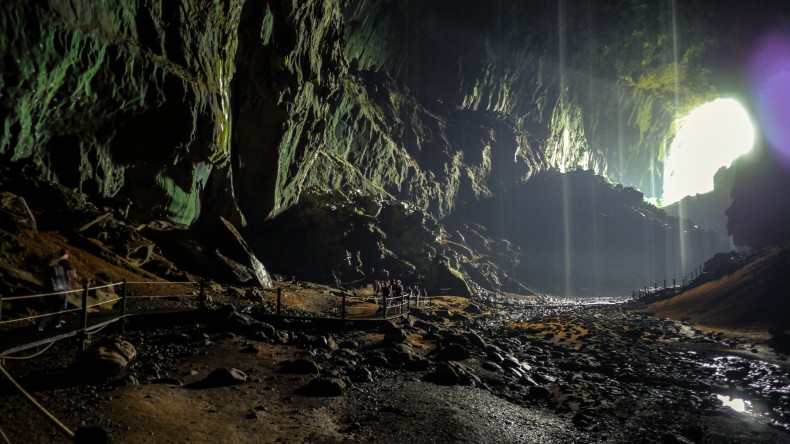 An enormous new cave has been discovered in Sarawak, Malaysia that could rival neighbouring chambers like Deer Cave (seen above). Photo Credit: robdu91

It’s not every day that an ancient subterranean tunnel is discovered – let alone one over 6 million years old, located in the midst of a national park, and potentially among the world’s top 15 largest caves – but that’s exactly what’s happened in Gunung Mulu National Park, a famous nature reserve and tourist destination in the Malaysian state of Sarawak.

Famed British caver Andy Eavis discovered what is now known as “Conviction Cave” on October 15.  The massive cave system is named for good reason – Eavis has launched over 24 expeditions since 1977 in search of the tunnel.  Located just 15km from the entrance of Gunung Mulu National Park, what could be one of the world’s largest caves starts with a hole in the ground just large enough for a human.

“It’s a vertical shaft that goes down for 100m. Then, you crawl through a 1km passage, which slowly gets bigger before reaching the chamber,” said Ramli Ahmad, a member of Eavis’s expedition team.  “When we explored it, our footprints could have been the very first ones ever inside.”

The cave’s size, great age, and the likelihood that it is completely untouched make it an important scientific discovery.  Layers of limestone clearly visible in the downward vertical shaft provide important insight into the world’s history.  Global events, as well as local ones like temperature levels, average rainfall and other weather patterns, can be estimated going back millions of years by studying caves like this.  This kind of information is especially important as it helps to estimate what might happen during periods of global change like the warming period we are currently experiencing.

Gunung Mulu National Park is already a Unesco World Heritage site, home to mega-diverse forests and world-famous cave systems like the Sarawak Chamber, the world’s largest, which could house 40 Boeing 747’s wingtip to wingtip.  Sarawak contains many other natural wonders, but they are often sacrificed for industrial and urban development.  We have Andy Eavis to thank for providing more reason than ever to protect treasures like these and press for their continued discovery.