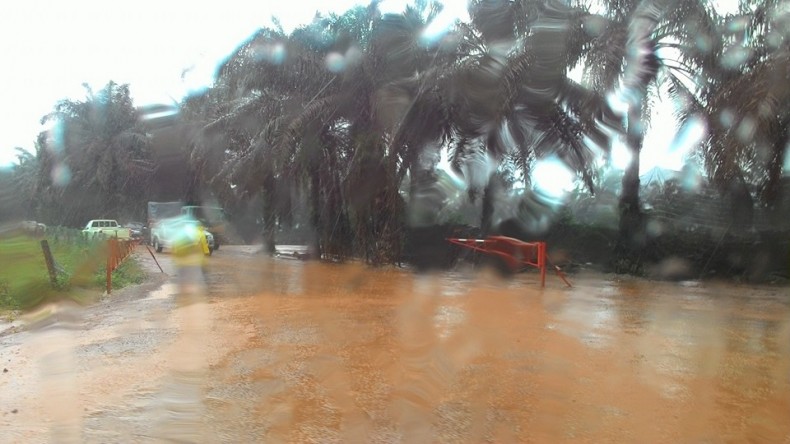 As the monsoon season approaches in Malaysia, a wave of anxiety larger than normal is washing over areas of Pahang used for bauxite mining.  Flooding is normally a big problem for the port city of Kuantan, but the many open-pit bauxite mines dug this year threaten to unleash torrents of drain-clogging and toxic sediment during heavy rain, making the danger greater than ever.

Bauxite mining in Pahang has exploded in the last few years.   According to the Minerals and Geoscience Department, production in Malaysia increased more than four-fold to 962,799 tons in 2014 from the year before.  Expansion hasn’t slowed – on the contrary, Malaysia’s bauxite exports for 2015 could top 20 million tons.  The bauxite rush has caused intensive environmental pollution and public health problems that could last for generations, but for the moment, flood danger is front-and-center in the minds of those at risk.

For some residents near bauxite mining hotspots, flooding fears have already come true.

“It was 3am and my family members were sleeping,” Kampung Padang resident Amir Izham Amit recalled in a recent interview. “I suddenly heard the sound of rushing water and woke up to find my whole house flooded.”

The flood that caused RM3,000 (US $700) in damages to Amir’s family home was composed of reddish mud washed down from bauxite mines nearby.  The sediment-heavy flow, combined with bauxite residue built up along roadsides during the past year, clogged the drainage pipes that have saved Amir and his neighbours from ever having to worry about floods in the past.   Flooding has never been an issue for Amir or anyone in his area, but it could prove this year to be a disaster.

“It only rained heavily for a couple of hours and the effect was already that severe.  I shudder to think what would happen if a full-blown monsoon hits,” Amir worried.

The same instance has been recently recorded in other areas as well, but flooding isn’t the only threat to communities near bauxite mining operations – experts are now warning of mudslides as well.  Vast stretches of exposed soil created by bauxite mining on hilly areas across Pahang could turn into mudslides or even landslides during a heavy rain.  To top it off, the bauxite runoff could pour sediment into rivers, making them shallower and again multiplying the risk of flooding.

Heavy monsoon rains are expected to hit the state of Pahang, including Kuantan, Kampung Padang and other communities near mines in the coming weeks.  They can only hope the predictions of trouble will not come true.