Bauxite in Malaysia | It’s in the Water 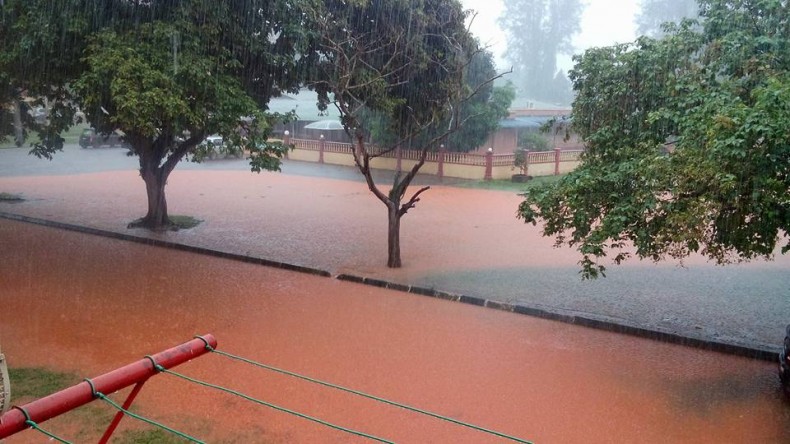 Irresponsible bauxite mining in Malaysia has inundated locals with red dust and sludge. It's already in the water, and monsoon rains will likely worsen the situation. Photo Credit: GERAM

It appears that some of Malaysian resident’s worst fears concerning the irresponsible bauxite mining sweeping parts of their country may have come true – traces of known bauxite contaminants have been discovered in treated water.

A December analysis of treated water in and around bauxite mining hotspot Kuantan revealed the presence of aluminum and lead.  Experts suspect that the contamination has come from bauxite sediment, washed into water supplies by heavy rains pouring down upon open-pit mines.

The sampling – which was, thanks to government inaction on the matter, funded by concerned citizens – discovered levels of lead and aluminum that violate health code violations in two residential areas, and a near-unacceptable level of aluminum in water taken from one residence itself in Felda Bukit Sagu.  The health ministry does not currently have guidelines for aluminum levels in water, but exposure to aluminum is believed to cause degenerative brain diseases like Alzheimers and Parkinson’s.

“Something must be done to control the aluminium pollution as a result of bauxite mining, which is contaminating the drinking water supply,” said Universiti Teknologi Malaysia Chemical Engineering Department’s Professor Dr Maketab Mohamed.  Maketab has since urged the health ministry to develop standards for aluminum levels.

To residents and researchers alike, the test results make clear something that people living in communities affected by bauxite mining have felt strongly for some time: that the industry is degrading their surroundings and endangering their lives.

“The impact of bauxite mining in Kuantan is visible and widespread,” said water quality specialist Dr Zaki Zainudin.  “The streams, rivers and even coastal areas have all turned red as a result of anthropogenic activities, either directly or indirectly.”

All this is the result of an industry that has exploded quickly and without much attention to proper regulation.  When conducted responsibly, bauxite mining can be a relatively sustainable enterprise, but Malaysian contractors have not been required to preserve surrounding environments, rehabilitate mined areas or operate with regard to public health. Considering that Malaysia’s bauxite production quadrupled between 2013 and 2014 to 962,799 tons and could top 20 million tons this year, it’s no surprise communities and ecosystems are feeling the hurt.

“Something is wrong here and it doesn’t take a genius to figure this out,” Zaki said.  “The issue is staring at us right in the face. The fact that nothing has been done, is a travesty.”

Looming large now in the minds of those living with this problem is the onset of the monsoon season.  Zaki and other experts have warned that further contamination, flooding and even mudslides could result from more rain washing through toxic and unstable bauxite soil.  Governments maintain that the industry is essentially too lucrative to stop, but they may soon have to change their tune.