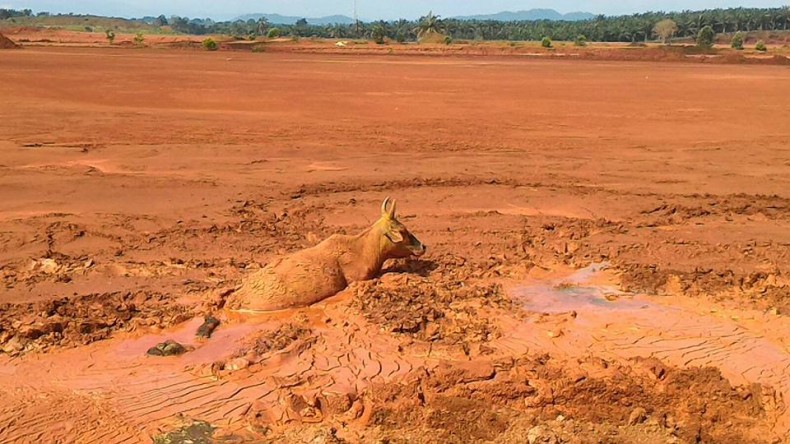 Rust-coloured dust and sludge, laden with mercury, arsenic and heavy metals, has been unleashed in frightening amounts upon Malaysia as a result of bauxite mining. Photo Credit: GERAM

In order for an environmental issue to receive real attention – no matter how important, impactful or terrible it may be – a certain ignition factor is required.  It’s unfortunate, but it often takes something like an explosion, mass species die-off or natural disaster to spur action for an important cause.

Such has been the case with Malaysia’s epidemic of poorly regulated bauxite mining.  Capitalizing on lucrative demand from China, licensed and unlicensed “contractors” have been popping up across the country, buying land (sometimes dishonestly) from farmers or villagers and hurriedly scooping ore-laden earth into trucks and tankers for shipment.  As a result, Malaysia’s bauxite exports have exploded over 1000% from 162,000 tons in 2013 to over 20 million in 2015.  Also as a result, 15km of Malaysia’s ocean and many of its rivers have been turned bright red. 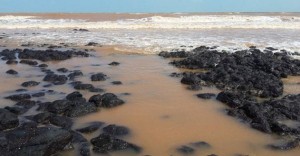 15 kilometers of coastline in Eastern Peninsular Malaysia has been visibly tainted with bauxite runoff. Toxin levels were dangerously high even before this happened. Photo Credit: GERAM

This recent (late December) event has been the ‘ignition factor’ for bauxite mining in Malaysia.  ‘Rivers, sea run red in Malaysia as Bauxite Exports Boom,’ reads a Reuters headline.  ‘Malaysia may Suspend Bauxite Mining,’ intones the Bangkok Post.  The articles and more like it will come, but so far they’ve touched only briefly on the reddening seas.  ‘Ignition factor’ events are a double-edged blade – they lead to media coverage, but often focus attention only on the tip of an environmental iceberg.  In reality, a shocking amount of poor regulation, human and environmental suffering, public outcries for help and government inaction have led to Malaysia’s red seas.

The tremendous surge of forest razing, earth digging and open-pit mining began after Indonesia backed out – for environmental reasons – as China’s main supplier of bauxite in January of 2014.  Malaysia started extracting and shipping bauxite as quickly as possible, in a process extremely damaging to environment and human health.

Massive environmental damage is caused by toxic chemical runoff from the by-products of the mining process, as well as the loss of topsoil. These by-products include heavy metals, as well as arsenic, and carry dire consequences for all living organisms found in the vicinity of the mines. Without guidelines and careful monitoring, these toxic chemicals can also leak into ground water as well as find their way into streams and rivers. As the water reaches the sea, the toxins cause irreparable damage to marine life. However, it is not only the toxins themselves which cause illness. The red dust that fills the air around bauxite mines (caused by the currently unregulated heavy transport vehicles that operate 24 hours a day around the mines and on public roads) has caused severe respiratory distress.

In July 2015, state authorities in Pahang revoked the licenses of 34 contractors due to rising concerns that the impact of unregulated bauxite mining in the region was becoming increasingly harmful to both the natural environment and the people of the state. This left 11 operators with permission to operate in the state – but these operators were large, mining enough to generate much of Malaysia’s 20 million-ton bauxite export figure for 2015 and causing much more damage.

As a result, rivers and seas near bauxite mines have been turning red for months.  Samples taken from bodies of water around the port town of Kuantan in early September showed heavy metal contamination and the early stages of radiation contamination.  These results, from an independent test, came just after government officials tested the water and claimed there was no risk.  In October, another official water test found arsenic, mercury, lead, cadmium, iron, chromium and other metals – some of them in amounts far below legally acceptable levels.  It is now suspected that bauxite poisoning has already contaminated drinking water sources. 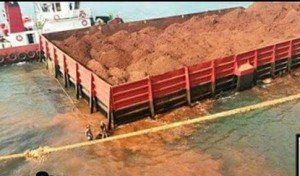 Poor regulation has enabled shipments like this one to wreak havoc on marine environments. Photo Credit: GERAM

While aquatic species are having their gills clogged, becoming inundated with toxins or simply dying in large numbers, Malaysian citizens have been dealing with a lot above ground.  Bauxite lorries spreading toxic dust still blow through towns near mining operations 24 hours a day, completely congesting roads and eventually caking highways in thick layers of red sludge.  The problem has gotten so bad near Kuantan (and governments ignored so many pleas for regulation) that five bauxite lorries were recently burned by an angry public.

Now that monsoon season has hit, much more bauxite residue is being washed into rivers and seas.  Roadside drainage pipes have also been clogged with the red dust, rendering just a few hours of moderate rain enough to flood houses that have never been at risk before.

It is all this that has led up to the reddening of 15km of coastline near Kuantan.  That the event has spurred governments to enact a temporary ban on mining activity, but the problems caused by bauxite mining will take much effort and a long time to resolve.