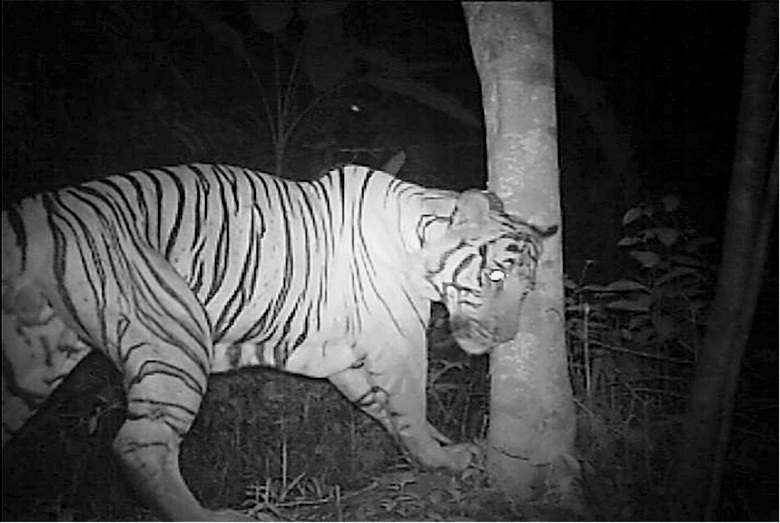 A male Malayan tiger rubs his cheek against one of the hair traps used in the study. Photo Credit: Creative Commons

Peninsular Malaysia does not lack in majestic terrestrial carnivores – when it comes to species, that is. As many as 28 carnivore species roam the country’s remaining forests, including such regal beasts as tigers and leopards. But as a result of illegal poaching and a loss of their natural habitats, their numbers are fast dwindling.

To complicate matters, the members of many endangered species remain not only sparse but also elusive in the wild. And if scientists cannot keep track of them, they are hard-pressed to know how to protect them better. Scat samples have long been a staple of conversion efforts as they allow scientists to collect the DNA of individual wild animals through a non-invasive method, in order to determine the genetic health of wild populations.

But in humid tropical climates like Malaysia’s, such samples often do not last long enough for researchers to find them. Instead, in a recent study, which was just published in Tropical Conservation Science, a team of researchers from the Malaysian group Rimba resorted to a new method of testing by deploying scented hair-traps in two main wildlife corridors. They laid  23 traps in Perak state and 12 in Terengganu, placing some on the ground for canids and the rest on trees for felids, alongside motion-triggered cameras.

The traps were meant to lure animals into rubbing up against them to leave their own smell. As they did so, they would hopefully leave behind some hair, which could be collected and genetically tested. The researchers monitored the traps for a total of 764 nights, during which period they managed to detect 18 carnivores, including a Malayan tiger and a clouded leopard. In the end, however, few of the animals left behind adequate hair samples for testing.

“Our preliminary results indicate some potential for scent-baited hair traps to obtain hair samples of large carnivore species,” the authors wrote. “However,” they added, “it remains to be seen whether they can serve as effective monitoring tools for carnivores, especially in landscapes such as Peninsular Malaysia where elephants pose a serious obstacle to the function of these traps.”

Yet by no means was this test ultimately a failure. It has demonstrated anew that as a myriad of wildlife species are becoming increasingly beleaguered in their natural habitats across Malaysia, creative tools in conservation efforts will be necessary to help them in their plight.