What has Bauxite done to Malaysia? 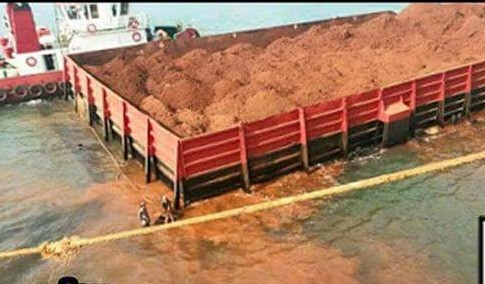 Bauxite mining in Malaysia has created a big imbalance in environment, economy and public health. Where will this problem go? Photo Credit: GERAM

The Malaysian state of Pahang has been seeing its forests and farms leveled, its earth dug up, its waters polluted with vast amounts of mercury and arsenic, and its people suffer increasing cancer risks for over a year now.  The reason?  Bauxite mining.  The pace?  Frantic.  The government?  Unwilling to forfeit profits for public safety and environmental health.  Unwilling, that is, until forced by environmental disaster.

Now that 15km of coastline has been stained red with heavy metal-laden soil washed by rain from open-pit bauxite mines into the sea, the industry been put on hold.  A three-month ban on bauxite mining, effective Jan 15, has been enacted in Pahang.  It’s only a short break, but as the dust settles it’s becoming clear what a mess this bauxite mining has become.

A whopping 15.9 million tons of bauxite were shipped from Malaysia to China from January to September in 2015.  That’s an increase of 11.51 times over the previous year, and it was apparently driven in part by corruption.  Investigations into Pahang’s department of land and mines have resulted in the arrest of 7 officials.  They’ve been charged with selling orebody documents to illegal bauxite mining operators.

Legal or illegal, the bauxite industry has become a huge contributor to GDP.  Based on a modest estimate of 20 million tons of bauxite exported in 2015 at an average price of US$45 (RM180) per ton, bauxite sales out of Pahang would have been worth RM3.6 billion (US $820 million) for that year.  Through a 5% royalty, the Pahang state government has profited RM180 million (US $40 million) – no small chunk of change.

The loss of this income would be tough on Malaysia’s economy, but it doesn’t look like that income will be lost.  Chinese importers are sure Malaysia will continue production directly after the 3-month ban.  “There’s a lot of money to be made, so they will definitely ramp up again after the Lunar New Year holidays,” said a Chinese importer.

Chinese alumina refiners are “unfazed” by the ban.  “Chinese refiners… have a lot of stockpiles at Chinese domestic ports, enough to last quite a while,” said a Shandong-based refiner.  The Malaysian ban is also just a ban on extraction – the 2 million tons of bauxite ore sitting at Kuantan port will continue to be shipped out.

What happens when production resumes will depend on what new regulations and laws are imposed on miners.  Previous mining has spread dust and sludge (when it rains) throughout the waters and villages of areas near mines.  Waters near bauxite mining hub Kuantan recently tested through the roof for mercury, arsenic and aluminum, and fish are dying in large numbers.  It is also suspected that drinking water has been contaminated.  We can only hope that, when mining resumes, it will be done the right way, with consideration to the environment and public health.