Penang is set to get its First Green Condos 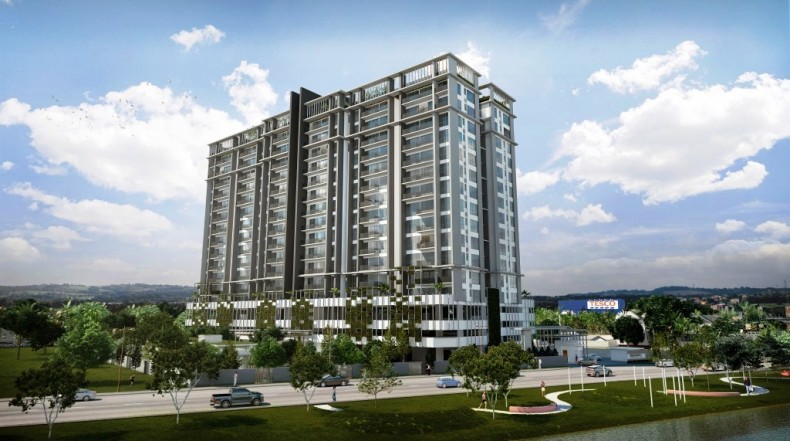 The River Tropics condominium in Penang will feature certifiably green units in a first for the island. Photo Credit: New Bob Group via NB Tropics

Penang is an architectural gem renowned for its historic mélange of buildings constructed in British colonial, Indian, Chinese and Malay styles, all of which vie for attention in scenic arrangements. Now the island’s architectural landscape is set to be enriched further still – this time with a project promising green standards.

A new condominium in development, called “River Tropics,” in Seberang Jaya township has been declared certifiably eco-friendly by both Malaysia’s Real Estate and Housing Developers Association (Rehda) and Singapore’s Building and Construction Authority. Developed by the New Bob Group and scheduled to be opened early next year, the 148-unit property will feature the latest eco-friendly technologies aimed at maximizing the energy and water usage of individual homes. Water- and energy-saving smart technologies will include high-efficiency toilets and self-tinting windows that modulate the degree of sunlight that enters rooms during daytime so as to allow residents to rely on natural light instead of the electrically powered indoor variety.

The developer is seeking to lead the way in sustainable new buildings in Penang with the backing of the island’s City Council, which wants to encourage other developers to follow suit through financial incentives. As with green homes elsewhere across Malaysia, the idea is that the principles of green living will need to start right at home for the sake of both individuals and communities. By cutting back on their water and energy usage over an extended period of time at home, residents will not only save money for themselves but also contribute to the sustainable management of resources within their communities.

Like some of its neighbors in Southeast Asia, Malaysia has been a victim of its increased material prosperity and often helter-skelter development when it comes to an unsustainable exploitation of natural resources, which has duly been reflected in adverse lifestyle changes. In the past, traditional homes, which were designed for the country’s tropical climate, were naturally eco-friendly. They were modest in size and constructed from renewable and recyclable materials: wood, bamboo, thatch. They often used their own water sources from adjacent tanks, cisterns and reservoirs of collected rainwater, and they had negligible carbon footprints. Designed for the year-long sweltering heat and humidity, these so-called vernacular homes were airy and naturally well ventilated.

Today’s modern homes, which have been built from stone, cement, glass and steel and designed in Western architectural styles originally for colder climates, are often a far cry from such prudent stewardship of available resources. They tend to be far less eco-friendly, including the frequent use of excessive indoor lighting and air-conditioning. Households also tend to waste excessive amounts of water. In order for green homes to gain a stronger foothold in Malaysia, local developers will need to lead the way.