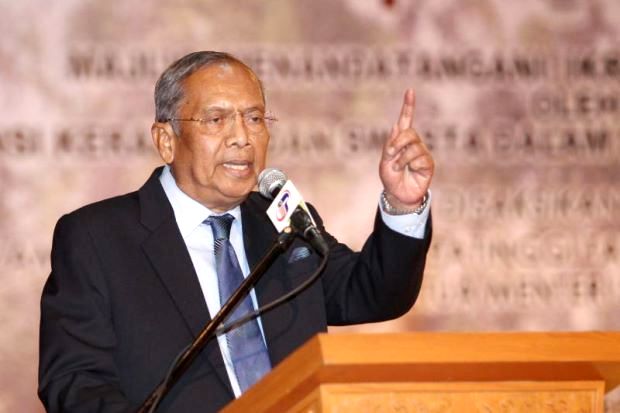 If you think you can carry on destroying Sarawak’s forests, think again – that is the warning that the state’s Chief Minister Adenan Satem has issued to illegal loggers. Mincing no words during a meeting for local ministers in scenic Santubong in Borneo, Adenan decried the “desecration” of the island’s world-famous natural environment and reiterated his earlier pledge to clamp down on illegal logging.

“We will come down heavy on those who want to desecrate our environment and our biodiversity, which we should leave intact for future generations,” the chief minister stressed. “Unabated illegal logging or land usage activities can destroy the environment,” Adenan added. “What has happened in the Cameron Highlands in Pahang should serve as a lesson for us all. The illegal clearings there have resulted in landslides and serious flooding and for highland temperatures to go up.”

Sarawak’s government, the minister explained, will no longer issue new licenses for timber companies and for the cultivation of commercial oil palms on the sites of newly cleared forests. Instead, the state will set up more natural parks in an effort to preserve Borneo’s justifiably world-renowned biodiversity hotspots.

Adenan’s latest pledge to clamp down on illegal logging has come not a moment too soon for the island’s beleaguered flora and fauna, and environmentalists hope his government will follow through on his promise. Touted by Malaysians as Bumi Kenyalang (“Land of the Hornbills”), Sarawak state in northwestern Borneo has seen much of its primeval rainforest cover decimated over the past years and decades.

The state’s previous governments insisted that somewhere between 60% and 80% of the territory’s forest cover has remained intact, but foreign conservationists have disputed these claims, positing that the actual figures are a mere tenth of such estimates. Intensive, decades-long deforestation has wreaked havoc with picturesque Sarawak’s famed biodiversity and the lifestyles of its indigenous tribes alike. Timber companies and palm oil plantations have been the two main culprits, while some of the previous chief ministers in Sarawak were not immune to accusations of graft. The current chief minister has been making efforts to roll back illegal logging.

Decisive action will be crucial in putting an end to illicit deforestation so as to preserve remaining natural habitats and save endangered species, Borneo’s wild orangutans among them. “I am very concerned about the state of our orangutans and other mammals in Borneo,” Adenan stressed at a meeting of the Great Apes Survival Partnership last summer in Kota Kinabalu. “I am a naturalist by inclination and have made concrete decisions with regard to conservation of our natural resources, especially with regard to fauna.”