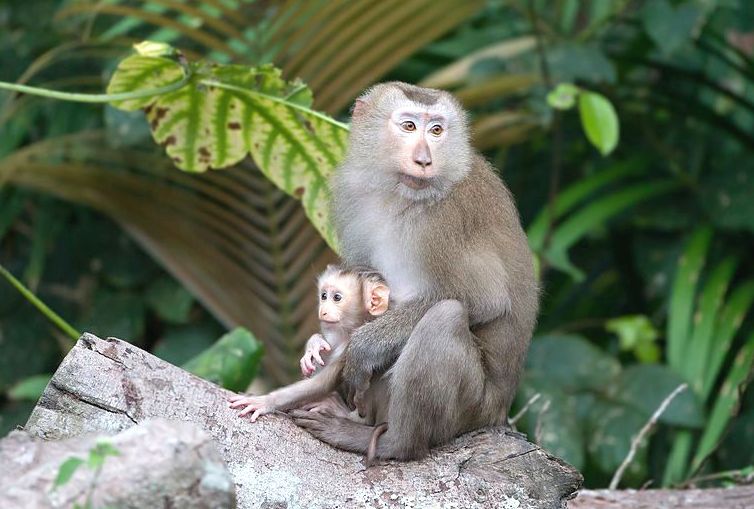 A pig-tailed macaque mother sits with her baby in a protected patch of tropical forest. Photo Credit: Wikipedia

In the Hollywood movie Medicine Man, an eccentric scientist, played by Scottish actor Sean Connery, seeks to save a rainforest from destruction as he believes that its unique biodiversity holds the ingredients of new cures for debilitating human diseases. A bit of celluloid fantasy? Hardly. The health of natural environments has a direct impact on human health.

A case in point:  Intensive deforestation in Malaysia’s rainforests is exposing more and more people to a type of malaria previously found only in arboreal long-tail and pig-tail macaques, according to a study published in the journal Emerging Infectious Diseases. Caused by a blood-born parasite and transmitted by mosquitoes,  this “monkey malaria,” as the disease has been dubbed, has successfully jumped the species barrier and has been infecting humans in several areas of the country.

“The zoonotic malaria species Plasmodium knowlesi has become the main cause of human malaria in Malaysian Borneo. Deforestation and associated environmental and population changes have been hypothesized as main drivers of this apparent emergence,” write the study’s authors, who spent five years gathering data in 450 villages within the districts of Kudat and Kota Marudu in Sabah state in Borneo. “[The] results suggest the likelihood that deforestation and associated environmental changes are key drivers in P. knowlesi transmission in these areas,” they conclude.

First identified in humans in peninsular Malaysia in 1965, this strain of malaria, once confined to simians, has spread widely within some Malaysian communities. In Sabah alone, suspected infections from the parasite rose from 2% of all recorded local malaria cases in 2004 to an alarming 62% in 2013. Albeit most patients have responded well to treatments, some of them have succumbed to the disease.

As forests have been cleared extensively, mosquitoes bearing the pathogen have come into closer and closer contact with human communities through increased “spatial overlap” between villagers living at the edges of forests and macaques living in nearby woods. In other words, deforestation has been driving the rate of infections from the parasite. The researchers found that during their five-year period of observation, half of the villages surveyed lost around a tenth of their previous forests within a 3-mile radius. “Given our findings, we view deforestation as having distinct public health consequences, which need to be urgently addressed,” said the study’s lead author Kimberly Fornace, a research fellow at the London School of Hygiene and Tropical Medicine.