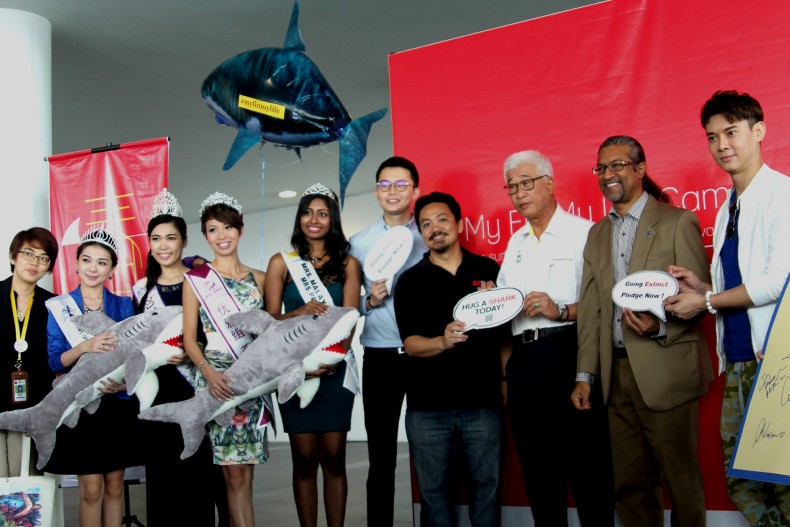 Local politicians, celebrities and WWF-Malaysia officials pose for a photograph during the three-day "My Fin My Life" event in Penang in January 2016. Photo Credit: WWF-Malaysia

Sharks are wonderful creatures and they do not belong on a plate. That was the message of a three-day program organized by the World Wide Fund for Nature’s Malaysian chapter and Penang State’s government. Running from January 16 to 18 at a popular mall on the island, the “My Fin My Life” campaign sought to educate Malaysians, young and old, about the need to protect increasingly beleaguered shark species. The events featured shark art workshops for kiddos, the launch of a life-sized shark model, photo-ops with a shark mascot, and a fun-filled Amazing Shark Race.

Sharks need any help they can get in their struggle for survival. These majestic fish – whose evolutionary lineage stretches back some 450 million years and which began to rule the oceans well before dinosaurs appeared on the scene – serve vital roles in marine ecosystems as the top predators in food chains. They keep fish stocks healthy by preying on weak, old and diseased specimens. Yet many shark species have been fished almost into extinction in the world’s seas and oceans. They are especially prized for their fins, which are considered to be delicacies in many East and Southeast Asia nations, Malaysia among them.

Malaysia is among the world’s Top 10 producers of shark products and is the third largest importer in volume terms, according to the United Nations’ Food and Agriculture Organization. As much as 84% of imported shark fins are consumed locally. “Between 2004 and 2011, an average of 1,384 metric tonnes of imported shark fins were consumed annually in Malaysia,” WWF-Malaysia notes. “In the past ten years, the volume of shark fin consumption has increased by an average of 54% per year.” In other words, at this rate several shark species will soon go extinct, especially as the increasing parlous state of the Earth’s oceans and their diminishing fish stocks have likewise taken their toll on shark populations worldwide.

Yet taking shark fins off the menu is a daunting task considering that the dish has long been deemed a rare delicacy in some cultural traditions. “Shark fin soup traditionally symbolizes wealth, power, prestige, and honor to the Chinese community,” Phee Boon Poh, Penang State’s Exco for Environment, Welfare and Caring Society, noted at the event. “However, the reality is that sharks are endangered species that should be protected, and therefore, we need to change the way we look at sharks.”

The minister has called on Malaysians to stop consuming shark fin soup. The island’s government has not served shark fin soup official state functions since last June, he added. Several hotels on Penang, including The Shangri-La and The Hilton, have followed suit by removing shark fins from their menus. It is now many customers’ turn to do likewise and turn their backs on shark fins: those fins belong on the backs of live sharks left undisturbed in the oceans, not on plates served in restaurants. There is nothing “powerful,” “prestigious,” or “honorable” about helping drive marine species into extinction for cultural or dietary reasons.