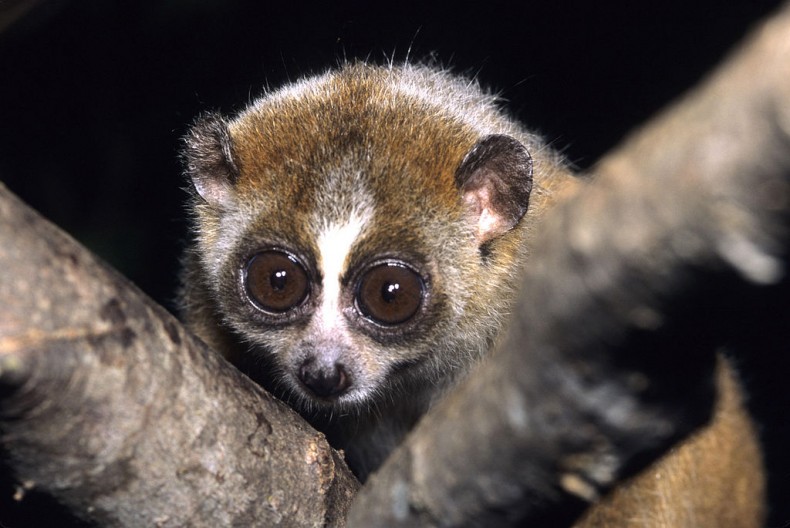 Unique primates like this slow loris are increasingly endangered in the forests of Sabah. Photo Credit: Wikimedia Commons

Slow lorises are small nocturnal primates that forage in the foliage of tropical trees and sport the physiognomy of cute teddy bears. Proboscis monkeys are reddish-brown tree-dwellers famed for their unmistakably flamboyant sniffers that make them resemble crotchety cartoon characters. Agile gibbons are long-limbed arboreal acrobats celebrated for their swaggering stunts as they brachiate effortlessly from tree to tree. Orangutans, who need no introduction, are mischievous great apes that are ranked among the most intelligent animals on Earth. Long-tailed macaques are raucous, opportunistic gourmands that often comb beaches for crabs along tributaries and may snatch unwary visitors’ lunches at the first chance. Horsfield’s tarsiers are saucer-eyed little critters that lead inconspicuous nocturnal lives.

Quite a roll call of species, this, but what do they have in common? First, that they’re all primates. Second, that they all inhabit the rainforests around the Kinabatangan River in eastern Sabah state on the island of Borneo. Eastern Sabah’s forests make for a primatologist’s dream with its myriad of unique primate species, but despite ongoing conservation efforts many of them are noticeably worse off than we might think. So says a leading American primatologist, Russell A. Mittermeier, who recently revisited the area 36 years after his previous visit, in 1979, and calls the Kinabatangan River region one of “the best primate-watching sites in the world.”

“Sadly, the situation in the Kinabatangan and elsewhere in Sabah is fragile,” the scientist, who is a world-renowned conservationist, writes in an essay. “Much of the state, the Kinabatangan included, has been converted to oil palm as in much of the rest of Southeast Asia. The wildlife that survives is largely restricted to narrow strips of forest along the rivers, some of them disconnected from others. Protecting these remaining pieces and reconnecting them wherever possible is a top priority, and the key conservation organizations there are actively engaged in making this happen.”

On the upside, the local government has been actively promoting ecotourism to the area, highlighting local forests’ unique biodiversity, which also encompasses hornbills, pygmy elephants and rare birds. On the downside, continued development, including new roads, threaten to squeeze already beleaguered endangered species further into their diminishing natural habitats.  So what to do?  Mittermeier recommends a workable compromise as a long-term solution to ensure that Sabah’s primates will carry on swinging and scampering merrily among the trees for generations to come.

“[E]conomic development and preservation of natural resources do not have to compete,” he observes. “On the contrary, more often than not, both approaches can be reconciled.” He calls on the government to scrap a plan to build a new highway through the forest, along with a new bridge across the river. They would not only be eyesores on the bucolic idyll of local villages but also further endanger animals living in adjacent forests. Deforestation must too cease. “What is needed now is a compromise that will ensure the long-term well-being of local communities based on a growing tourist market, continue effective protection of the region’s globally important wildlife heritage, and meet the development aspirations of the government,” he notes.