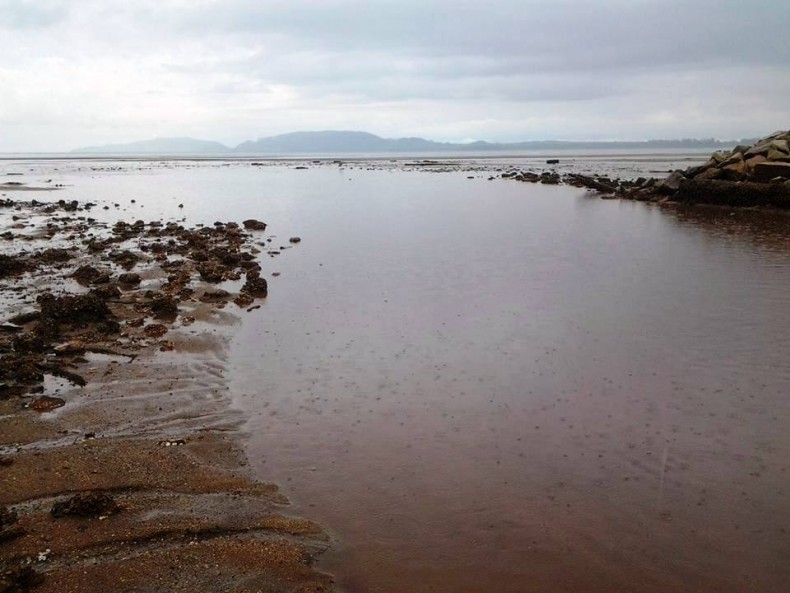 The sea near Kuantan has turned a toxic red in the wake of extensive pollution from nearby bauxite mining. Photo Credit: GERAM

The ecological fallout from bauxite mining in the Malaysian state of Pahang has affected the east coast town of Kuantan in myriad ways. Its water sources have become polluted and its tourism industry, a vital source of revenue for locals, has taken a hit. But the worst may be yet to come. Marine waters near the shores may turn into a “dead sea” with much of their indigenous ecosystem decimated by the lingering effects of toxic pollution. Sea creatures will especially be at risk of having their breathing systems impaired.

So warns a leading environmental scientist. The extensive pollution from bauxite mining “affects all forms of life there, from the planktons to the top carnivores in the area, even the marine mammals,” noted Dr Harinder Rai Singh, a marine biologist who is chairman of the Malaysian Society of Marine Sciences. “For example, these sediments will clog the gills of the fishes and the breathing system of the clams. That is when all the marine life will start dying and it will be a dead zone.”

The damage, though extensive, comes with a silver lining – Malaysia’s government has declared a three-month moratorium, effective as of January 15, on all bauxite mining in Pahang state.  It may be that future bauxite mining can be made safer while still lending a hand to Malaysia’s troubled economy, but the damage done is another matter. Harinder is concerned that the local marine ecosystem may have been irrevocably damaged in the short term with its recovery lasting for up to three years.

In an alarming development in late December, the sea water at Batu Hitam, a beach famous for its black stones and popular with holidaymakers about 10 kilometers from Kuantan, turned red as toxic sediments from nearby bauxite mines had leached into it. “While it is possible for marine life to breed in the area after three years, they would still be in a polluted habitat,” said Harinder, whose department was conducting soil and water sample tests to ascertain the extent of the pollution in the area. “What is certain is this beach would be infertile for at least two to three years depending on the government’s clean-up plan.”

Although many organisms might be able to adopt to the increased levels of pollution over time, the toxic chemicals would remain in their system, from where they could spread far and wide up and down the food chain. And that is how the reckless actions of a few miners might harm the long-term health prospects of not only local ecosystems but also local people who depend on those very ecosystems for their food and livelihoods. Thus, environmental pollution always exacts a collective toll on people.