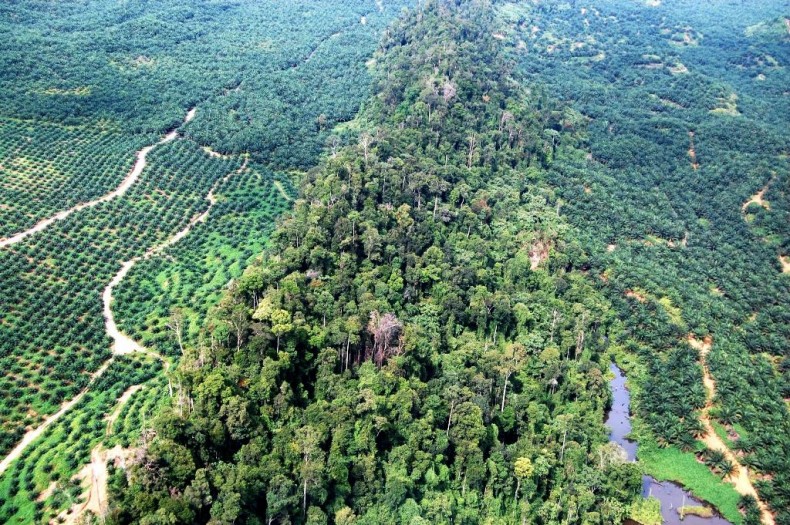 The Lower Kinabatangan Wildlife Sanctuary, already facing increased fragmentation, would be further harmed by the planned construction of a new paved road and a bridge in the area. Photo Credit: NGO Friends of the Orangutans

But there is another grave new threat to the wellbeing of flora and fauna in the 26,000-hectare sanctuary. In a bid to stimulate the local economy, Sabah’s state government wants to expand a paved road and build a new bridge that would cut through the wildlife reserve. The planned bridge will connect the western bank of the Kinabatangan River to Sukau village, replacing the current ferry, which  runs between Sukau and a gravel road built by an oil palm company. The new paved road will in turn connect Sukau village to Litang and Tomanggong, over 40 kilometers away to the southeast.

The new infrastructure is meant to boost local communities’ economy, but environmentalists believe that it might end up doing the exact opposite. New roads are vital arteries of transport, but in remote wildlife reserves such as in Kinabatangan they can inflict lasting damage on the local ecology. In addition to further fragmenting natural habitats, they also facilitate the easier movement of poachers and illegal loggers, both of whom pose a constant threat to the area’s wildlife.

The International Union for the Conservation of Nature  is set to declare Bornean orangutans “critically endangered” as a result of the continued loss of their habitat. Efforts are underway to protect these unique animals, whose numbers have dwindled to a mere 800 in the wild, but the new infrastructure could well undermine those efforts. The proposed building project would also go against the existing Sabah Elephant & Orangutan Action Plans, which calls on Sabah to “Prevent any process that would further fragment the habitat of” wild elephants and orangutans, including the construction of roads and bridges.

“The Kinabatangan region is already very fragmented and the populations of protected species such as Bornean orangutans and pygmy elephants are decreasing,” Upreshpal Singh, director of NGO Friends of the Orangutans, has said in a statement. “Their survival in the area will only be a bigger challenge if such a project is approved.” The environmentalist added: “We urge the Sabah government to cancel this project as it will cause dramatic environmental, social and economic consequences. Orangutans are endangered. They don’t need their habitat to be even more fragmented.”