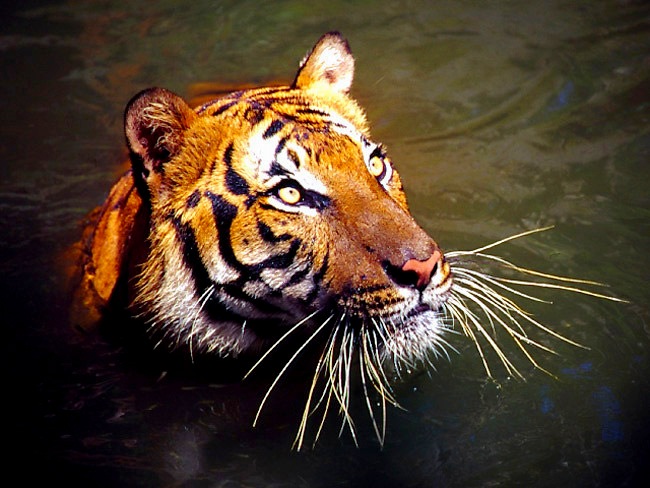 Malayan tigers, a unique subspecies, have been driven to the edge of extinction in the wild by habitat loss and poaching. Photo Credit: Wikimedia Commons

It was too late for the tiger, but Malaysian authorities pounced just in time to arrest its killers, three poachers, in the Kemaman district of Terengganu in late January. The three Malaysian men, all in their 50s, had killed the Malayan tiger, seeking to sell its body parts for RM10,000. Acting on a tip-off, local authorities intervened before the dead tiger could be spirited away.

“We raided the house in the evening where we introduced ourselves and the raiding team found the carcass in the bathroom, chopped into four parts, as they allegedly attempted to sell the tiger’s skin, bones and teeth,” said Mohd Hasdi Husin, director of Terengganu’s Department of Wildlife and National Park. “Apart from that, the meat was intended to be sold to restaurants selling exotic meat.”

One less tiger is bad news for Malaysia, whose eponymous and emblematic Malayan tigers (Panthera tigris jacksoni) have been reduced to the status of a critically endangered species, owing to habitat loss and wanton poaching. Possibly only as few as 400 specimens remain in the wild. Recognized in 2014 as a unique and separate subspecies in its own right, Malayan tigers live exclusively in the Malaysian peninsula and Thailand’s southernmost provinces. Thanks to their small size (they grow to only an average of 2 meters in length), Malayan tigers are adept at hiding well within less dense forests and jungles where they ambush-hunt deer, wild boar, goats and cattle.

They themselves might fall prey to poachers who intend to sell their body parts, which are prized for their allegedly curative properties in traditional Chinese medicine and can fetch large prices in the illegal wildlife trade. Until recently Malaysia’s laws imposed relatively minor penalties on people who killed wild tigers and other protected animals. In a well-publicized case in 2005 a man in Kelantan was caught with a dead tiger in his freezer and fined only RM7,000 under the Protection of Wild Life Act 1972, which prescribed a maximum penalty of a five-year jail term and a RM15,000 fine.

As an astute observer pointed it out apropos the lenient sentence, another Malaysian man received a far harsher penalty a few years later for stealing a few cans of Tiger beer: he was sentenced to five years in prison. “Clearly, our values are misplaced,” Loretta Shepherd noted poignantly in a letter to the editor published in Malaysiakini in 2010, which happened to be the Year of the Tiger, according to the Chinese zodiac.

That same year, however, the Wildlife Conservation Act was passed, prescribing much stiffer penalties. Poachers now face mandatory jail terms of up to five years and fines of at least RM100,000 for killing tigers. And so they should. One way of protecting these magnificent and critically endangered animals involves making it prohibitively expensive and personally ruinous for people to kill them. All Malaysians must understand that their country’s tigers are worth infinitely more alive than dead.