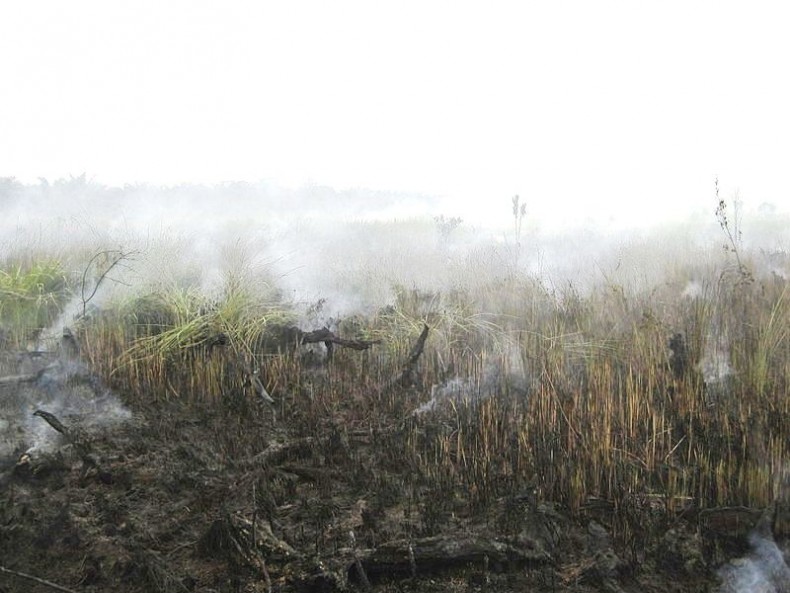 A smoldering peat fire in Raja Musa, Selangor, wreaked havoc with the local environment and released massive amounts of carbon dioxide into the atmosphere in 2013. Photo Credit: Wikimedia Commons

In 2013 a smoldering peat fire near the Raja Musa Forest Reserve in Selangor triggered an environmental disaster, decimating the local flora and enveloping a large swath of land in choking, lingering haze. The fire, which left massive ecological devastation in its wake, was set off by a palm oil company that sought to clear forests and peat swamps for its new plantations.

Three years on, the peat swamp in Raja Musa is well into recovery with its unique ecosystem springing back into life. A lot of that is thanks to local villagers who have been tending samplings in their village nurseries with a view to replanting them in peatlands when the time is right. The area’s rehabilitation has required a collaborative effort: locals and volunteers have also blocked drainage canals dug by plantation companies to help drying peatlands replenish themselves with plenty of water. Natural regeneration has duly been taking its course. “I wanted to help rehabilitate the forest,” one local villager, who has been participating in the rehabilitation project, told Al Jazeera. “I believe a good forest will provide water for our agriculture. We have to work on maintaining it.”

More power to him and like-minded villagers. With their waterlogged soils, peatlands do indeed perform vital functions: they serve as invaluable water sources for local communities and as habitats for vibrant and unique ecosystems. Raja Musa is part of the North Selangor Peat Forest Swamp, one of the largest protected areas of peat swamp forest in Malaysia, which covers some 73,000 hectares, or about the size of Singapore. Malaysia boasts a large extent of peatland, covering around 26,685 square kilometers and accounting for 8.1% of the country’s land area. In decades past, the nation had plenty more peat swamps and forests, but many of them have since been converted into agricultural farmland.

Burning peatland harms not only local environments but the climate of the entire planet as well. Peatlands store great amounts of carbon in thick layers of organic material (leaves and twigs accumulated over eons), which often go down 20 meters deep. When they are burned, all that carbon gets released into the atmosphere, thereby contributing to global climate change. Drying peat burned to a depth of 50 centimeters releases 1,101 tons of carbon dioxide a hectare, and slow-burning peat fires can smolder unabated for weeks or even months. Dry peat also remains far more vulnerable to new forest fires. Last September peat fires pumped more carbon dioxide into the atmosphere than did the entire US economy.

Yet by now peat fires have become exasperatingly frequent occurrences. Each year, often for weeks at a time, much of Southeast Asia is covered in thick haze as a result of fires lit to torch vast areas of peatland in neighboring countries like Indonesia. Large land areas become covered in thick curtains of noxious fumes, exposing people to the dangers of respiratory illnesses and lung cancer. “To make any real difference, there will have to be a massive change in mindsets,” said Greenpeace activist Rusmadya Maharuddin.  Companies and governments, he added, must accept “that peatlands aren’t really areas that we can use for agriculture at all.”