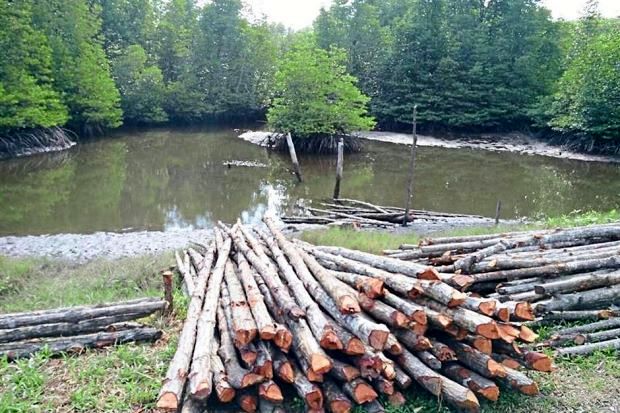 Illegal logging is, well, illegal in Sarawak, yet the practice seems to remain so common that you may not even have to search for evidence – you can literally stumble across it. Sarawak Forestry Corporation officials recently did just that when they ran into several large pile of illegally-felled trees. The freshly cut timber was piled by the roadside and apparently ready to be taken away by the loggers or their accomplices.

Ironically, the officials were on their way to conduct a program on conservation when they spotted five piles of bakau poles by the roadside at Jalan Sungai Awat-Awat. “Our officers came across five piles of ‘bakau’ poles. We counted exactly 529 logs,” the Sarawak Forestry Corporation said in a statement. “They were just by the road near here. We knew immediately that these were illegal logs since there were no licence or permit issued to extract ‘bakau’ poles from Lawas at this time.”

Word of illegal logging activities has been circulating in the area for some time. “There had been rumours of illegal harvesting of bakau in the area a few months ago, but to date, our enforcement team have not been able to catch the culprits nor found any of the loot,” the statement said. “Although we managed to seize 529 bakau poles, we shall continue to be vigilant, hoping eventually to nab the offenders.”

Fingers crossed on nabbing the offenders. A police complaint has been lodged and the Sarawak Forest Department will reportedly investigate the incident. Last year the department conducted a series of raids – a total of more than 240 – on timber camps and companies in a concentrated effort to root out illegal logging. A stricter new law, passed last year, makes it easier to successfully prosecute wrongdoers by passing the onus onto them to prove the timber in their possession has been obtained legally.

As this latest incident demonstrates, despite recurrent crackdowns illegal logging remains a persistent problem in Sarawak. The practice has not only contributed to a degradation of the natural habitats of Borneo’s unique and endangered species, but also exacted a heavy toll on indigenous communities who have always depended on the bounty of forests for their survival. Since 1973, more than 80% of lowland forests in Sarawak have either been cleared or logged extensively. According to a recent report, “nearly two-thirds of the state’s surviving forest cover remains in active logging concessions, while large areas of logged-over forests are slated for conversion to oil palm and timber plantations.”