‘Turtle Egg Dinner’ Investigation Drags on. Minister Has Yet to be Questioned 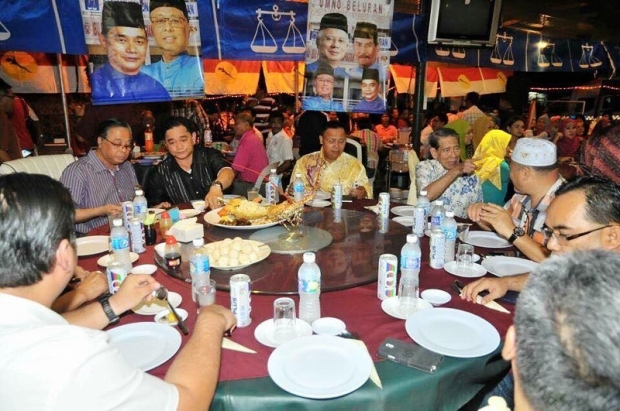 Federal Minister Ismail Sabri Yaakob (seated on the far left) is photographed in this image posted on Facebook last November at an Umno dinner where turtle eggs are served. Photo Credit: Facebook image

Ismail Sabri Yaakob, the federal minister of rural and regional development, is no stranger to controversy, be it his call on ethnic Malays to boycott Chinese-owned businesses or some of his other equally dubious ethnocentric proposals. Last November the minister landed in hot water yet again when he was photographed at an apparently Umno-sponsored dinner where he and other diners were served around two dozen eggs of protected turtles.

Local environmentalists weren’t amused. “What kind of message are the restaurant and the people [including senior officials] consuming those turtle eggs are sending to the next generation, to Sabah people, to all of us working hard to conserve and protect wildlife in our beloved Sabah?” Dr Benoit Goossens, director of the conservationist agency Danau Girang Field Centre, wondered, and rightfully so.

Selling or possessing protected animal products, including eggs, is an offence under the Wildlife Conservation Enactment 1997, which carries a fine of up to RM50,000 and/or a jail term of up to five years. At the very least the minister was an unwitting party to a wildlife-related violation at an event in which he participated, but he dismissed the incident as a misunderstanding. In the wake of a public outcry over the consumption of turtle eggs at the dinner, local authorities launched an investigation.

Three months on, the results are in: little progress has been made in the case. Fourteen people have reportedly been questioned, but “We have yet to issue any letter or contact the minister to get his statement because of logistical issues since he is in Kuala Lumpur,” said William Baya, director of the State Wildlife Department. For good measure, Masidi Manjun, minister of State Tourism, Culture and Environment, explained that investigators were not targeting Ismail, but merely wanted to record his statement. So there you have it.

While few environmentalists would want to see Ismail prosecuted over the dinner, Malaysians who are concerned about the exploitation of their nation’s magnificent flora and fauna might well wish to see a greater degree of transparency and accountability among politicians. After all, it’s these lawmakers and decision makers who should be expected to lead by example when it comes to a rigorous enforcement of the laws that regulate the sale and consumption of protected species, isn’t it?