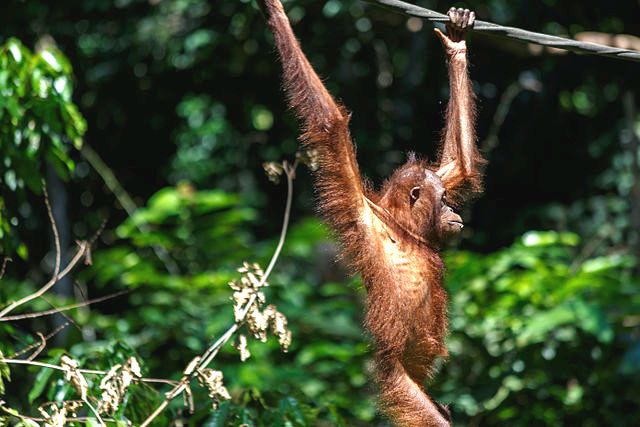 A young orangutan swings from a rope at the Orangutan Rehabilitation Centre in Sepilok. Photo Credit: Wikimedia Commons

Malaysia’s endangered orangutans need all the help they can get. Yet in the unending struggle to save these highly intelligent and unique apes from extinction in the country’s forests, at least some of them need a little less help than they once did. That is according to Dr Sen Nathan, assistant director of the Sabah Wildlife Department.

Sen says that the number of orphaned orangutans in the state has visibly declined over the years. Only two animals were brought to the rehabilitation center last year in Sepilok, near Sandakan, whereas back in the 1990’s the center received several times as many orphaned orangutans. “This decline is mainly because as much as 80% of orangutan habitat are now protected, thanks to the efforts of the Forestry Department,” Sen said, referring to the Ulu Segama-Malua forest reserve and the Lower Kinabatangan wildlife sanctuary.

Just how enduring and effective such stepped-up protection of wildlife habitats will turn out to be over the long run remains to be seen, however. Animal rights activists and conservationists have just issued a warning that a planned new paved road with a new bridge across the Lower Kinabatangan Wildlife Sanctuary will likely lead to the further erosion of local forests, thereby compromising the health of orangutan and wild elephant habitats in the area.

Meanwhile, the Sabah Wildlife Department has announced that the Orangutan Rehabilitation and Conservation Program, which it has co-managed with Shangri-La’s Rasa Ria Resort & Spa in Kota Kinabalu over the years, is set to come to an end in April. The hotel’s Orangutan Care Project, which was launched in 1996, provided care for orphaned orangutans at the resort’s own 64-acre Nature Reserve. The reserve also provides guests with nature walks and offers educational programs for schoolchildren with a view to raising awareness of environmental issues among youth.

Over the years Rasa Ria’s project has looked after a total of 43 apes, the last three of which will now be returned to the department’s own Orangutan Rehabilitation Centre in Sepilok. From the center, after seven years of painstaking rehabilitation, captive orangutans are released into the wild in the neighboring Kabili Sepilok Forest Reserve. During its half century-long operation, the rehabilitation center has registered a total of 758 orphaned and confiscated orangutans, but their numbers have declined sharply over the past decade.