Sun Bears in Sabah are Falling Prey to Poaching, Abuse and Neglect 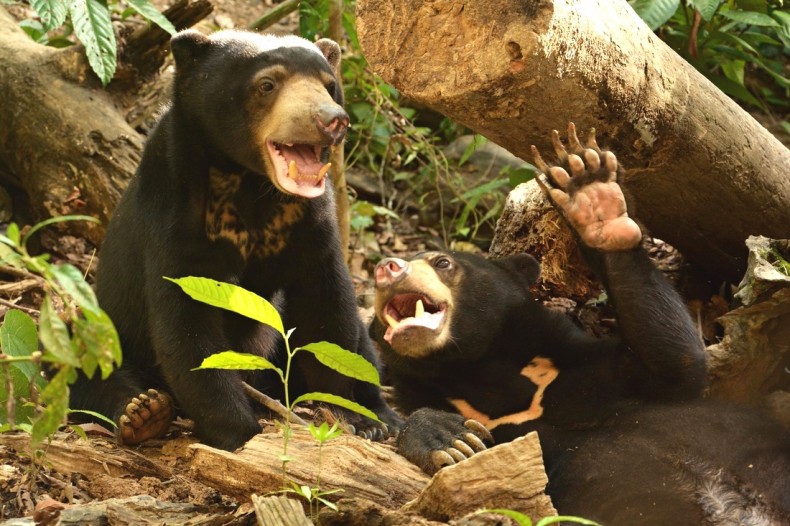 Two rescued sun bears are having a grand old time at the Bornean Sun Bear Conservation Centre in Sabah. Photo Credit: BSBCC via its website

You don’t need to be Sherlock Holmes to figure this one out: a dead sun bear was found floating in the Kinabatangan River, in Sabah, with both its hind paws missing. The witnesses: two Swedish tourists on a river cruise. The likely culprits: wildlife traffickers who killed the bear for its paws, which are prized ingredients for “bear paw soup,” a delicacy among diners who seek exotic wildlife on the menu. It’s elementary, Dr. Watson.

The Swedish tourists – Tommy Eriksson and his wife, Teuta Hajra – said they were distraught at discovering the mutilated carcass of the adult Malayan sun bear. The animal belonged to an endangered species whose numbers have plummeted over the past decades, owing to poaching and habitat loss, both in Sabah and across much of their natural range around the region. “We feel sad at witnessing the scale of deforestation in this area,” Teuta said. “The act of killing the animal is really brutal. This country has so much magnificent wildlife and I hope that it will take care of their habitats.”

This bit of news was bad enough. Within days, though, came another shocker. In a strongly worded letter to the editor at FMT News, Sean Whyte, CEO of Nature Alert, and Jennifer Yeap, from the animal rights group Malaysian Friends of the Animals, decried what they saw as local officials’ blithe indifference to the fate of two sun bears that had been held illegally and in abysmal conditions at Sabah’s Tawau Hot Springs Recreational Park. First, the conservationists explained, a spokesperson for the park had insisted that, following a public outcry over the treatment of the bears, the long-suffering captive animals were released back into the wild. Plausible? Hardly.

Instead, it presently transpired, the bears were taken by the Sabah Wildlife Department, which then planned to place them in Lok Kawi Zoo – a location the environmentalists dismissed as a poor choice of shelter for the abused animals given that they were likely to face further neglect and substandard care there. “Why dump both bears in the hands of incompetent individuals when experts are nearby? Why?” Whyte and Yeap wrote. By those experts, they were referring to the staff of Sabah’s Bornean Sun Bear Conservation Centre, which specializes in providing a proper home with proper care to rescued sun bears.

“There you have it,” the conservationists fumed. “More wild animals abused and neglected in Sabah. No one in government, who should care, does. It’s been this way for as long as anyone can remember, which explains why the rhino is extinct in Sabah, and a list of other species as long as your arm are facing a very uncertain future.”

Depressing? Certainly. Yet it was just another day for some of Sabah’s abused, neglected and beleaguered animals.