What to do about the Dangers from Bauxite? Enforce Laws and Stay Alert 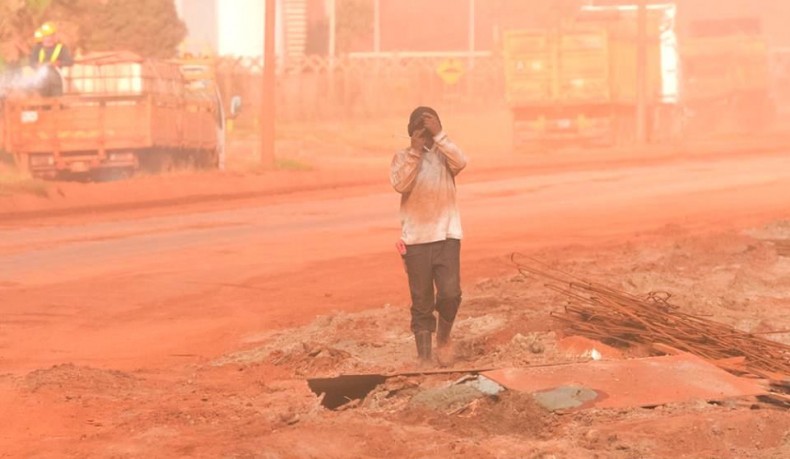 Locals in Kuantan have been hard hit by the bauxite disaster. Photo Credit: Malaysiakini via Facebook

A case in point is the recent bauxite mining fiasco in Pahang. The disaster has received extensive coverage in Malaysia’s media, alerting citizens to the dire state of affairs with the enforcement of existing environmental laws. Yet in the alarming facts and thickets of statistics regarding the extent of the harm done to the local environment, frequently overlooked have remained the minutiae of long-term harm inflicted on once vibrant local flora and fauna as well as on the lives of people in local communities. But it is exactly they who are – and will continue to be, for years to come – at the receiving end of the full impact of other people’s recklessness and negligence.

Pahang’s tourism industry has taken a hit, with visitors staying away in droves in the wake of the massive environmental disaster. Myriad locals in Kuantan have, as a result, been robbed of vital incomes. Local farmers and palm oil cultivators, too, have fallen on hard times. So have fishermen, who have reported precipitous  drops in the numbers of fish inhabiting coastal waters, now extensively polluted by noxious chemicals that have leached into them from nearby mines. For large swaths, the sea turned a poisonous red in the wake of the disaster. The water quality in the area was officially classified as Class Three, meaning it would require intensive treatment.

“[T]he fish sold here are caught in the deep sea and not in the polluted coastal areas, yet people are afraid to buy them, fearing that they may be contaminated with the residues from bauxite mining activities,” one of them told The Malaysian Insider. “This is why fish sales have dropped up to 50%. Now I find it tough to make ends meet.”

In other words, through their unscrupulous practices, fly-by-night mine operators out for a quick buck come hell or high water have robbed countless locals of their livelihoods while endangering their health in the process. Quite a crime, wouldn’t you say?

And how have local officials acquitted themselves? Rather poorly – perhaps predictably so, given their track record. They seemed to have been caught unawares by the magnitude of the unfolding disaster, and when they did catch on to it, all they mostly did was wring their hands, hum and haw, and refuse to accept responsibility for any of it. “It wasn’t me, stop looking at me!” they insisted through knee-jerk reactions of prevarication.

To be fair, there is no denying that bauxite mining is a lucrative industry for Malaysia and it can bring economic benefits to the country. But here’s the rub: without effective regulations and enforcement mechanism in place, bauxite mining will continue to take its toll on local ecosystems and human communities alike. The current three-month moratorium on bauxite mining, enacted in mid-January, is merely a stopgap measure that will hardly solve problems over the long term.

Several locals in Pahang have called on the government to stop bauxite mining for good. That is a laudable sentiment but unlikely to be embraced by decision makers. That is because the bauxite industry has become a huge contributor to the country’s GDP. In 2015, at least 20 million tons of bauxite were exported at an average price of US$45 (RM180) per ton, which means that bauxite sales out of Pahang would have been worth RM3.6 billion (US $820 million) for that year alone. “Through a 5% royalty, the Pahang state government has profited RM180 million (US $40 million) – no small chunk of change,” as we at Clean Malaysia have pointed it out.

Money talks, as we all know, but there is another factor that will complicate matters. By banning bauxite mining for good, Malaysia would also risk falling afoul of the Trans-Pacific Partnership (TPP) agreement. Prof Gurdial Sing Nijar, a legal expert, says a long-term ban might land the government with hot water. “Imagine if the bauxite mines are owned by foreign corporations and the TPPA is signed,” he explained at a meeting organized by opponents of the 12-nation trade pack. “And look at Lynas,” he added, referring to an Australian company that owns a refining plant in Pahang. “If you want to impose some restrictions [on all mining], will our government be in the position to tell them that our people’s lives and health are affected and say we want to stop you? That is the question.”

The answer is most likely no. According to TPP rules, a government cannot alter the conditions of existing agreements in case they adversely affect the local operations of foreign investors. Is that fair? You decide. But the point is this: even if the government’s hands are tied in some ways, it is perfectly free to act in other ways to forestall a repeat of the bauxite fiasco. Namely, it can pass stricter environmental laws and regulations and hold those who break them to account without fail.