Trafficking Gangs are Nabbed in Three Raids. Magpies and Weavers are Seized 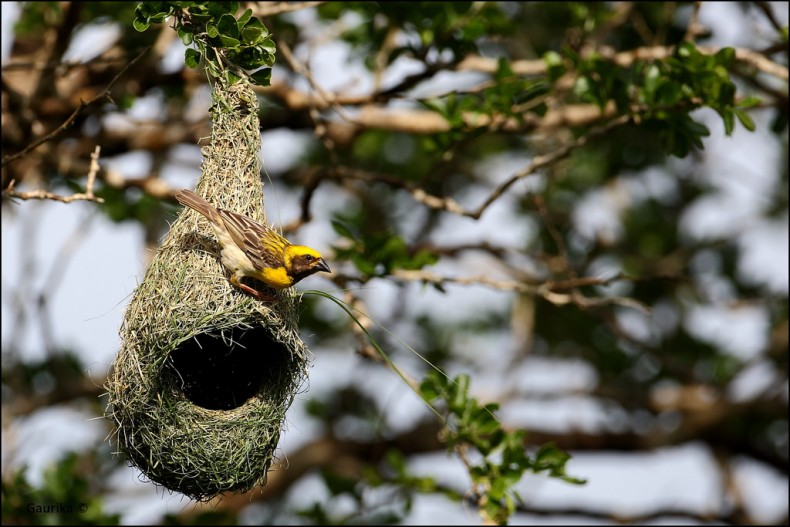 A Baya weaver sits on its nest in the wild. The endangered bird is popular with wildlife smugglers Photo Credit: GaurikaW via Flickr

Three down, plenty more to go. In three separate raids in Selangor, Johor and Perak within the space of little over a week, Wildlife and National Parks Department officials nabbed as many gangs of animal traffickers. They also seized two live mouse deer, 468 magpies, and 1,480 weaverbirds.

Acting on a tipoff in the Selangor raid, officials intercepted a car used by two wildlife smugglers waiting at a gas station in Kampung Jawa. “We found two mouse deer kept in a storage box on the back passenger seat of the car,” said Hasnan Yusop, the director of the department’s enforcement division. “Upon questioning, the two men in the car admitted they were waiting for a buyer to conclude an illegal deal.” If convicted, the two men face a fine of up to RM50,000 (US$12,000) and/or two years in prison for possessing protected species without permits.

In another other raid, conducted in Bandar Penawar, Johor, the department busted four men, including an alleged wildlife trafficking top dog who is believed to have been heavily involved in smuggling magpies and other exotic birds out of the country, especially to Indonesia. “Two of the suspects were Indonesians and we are tracking down several accomplices,” Hasnan said. “We seized a boat with an engine and two four-wheel-drive vehicles.” The suspects were caught while they were loading dozens of cages with magpies in them into a boat that they planned to use to spirit the birds out of Malaysia by sea. The birds can sell for thousands of ringgits, depending on the quality of their vocal range.

In another welcome development, this time in Perak, officials seized a whopping total of 1,480 Baya weavers from two men, who were caught at the Perah Rest and Recreation area with four large cages packed with weavers in their car. Known in Malaysia as ciak tempua, Baya weavers (Ploecus phillipinus) are native to the country and protected under the Wildlife Conservation Act 2010. Inhabiting grassland areas in flocks, these weaverbirds are famous for fashioning elaborate hanging nests from leaves, often on thorny trees and over water, to keep their chicks out of reach of predators. The bird remains popular with wildlife smugglers.

While we may be inclined to scorn wildlife traffickers for the extensive and unrelenting trade in protected exotic species inside and out of the country, they are hardly alone to blame for the continued despoiling of Malaysia’s unique ecosystems. Routinely, they only cater to an already existing  demand in such species within the ranks of the general public. So stop buying endangered and protected species, however much you might love to own one.

In addition, laypeople can, too, make a difference by staying vigilant and alerting authorities if they come across signs of wildlife trafficking. A family in Sabah did just that recently: they bought a young pangolin on sale in Sandakan – but immediately handed the endangered animal over to the local Wildlife Department, which soon released the pangolin back into the wild. The moral of this incident: At times you may end up holding the future of protected species literally in your hands.