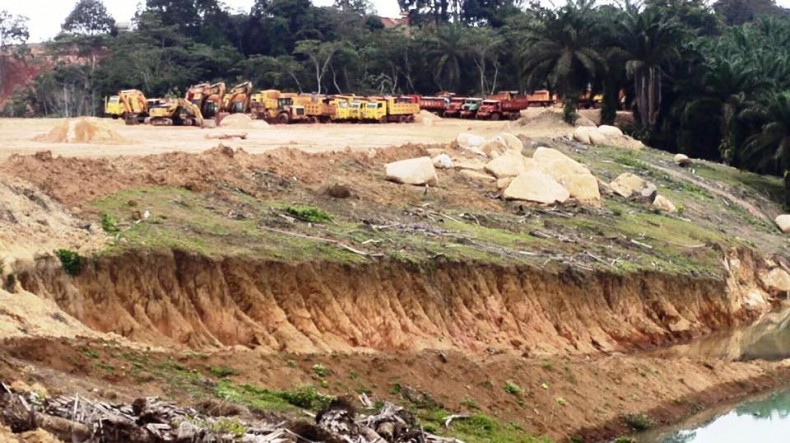 Intense bauxite mining destroyed or contaminated much of the land in Kuantan. Photo Credit: GERAM

We live in a complex world with people often having competing agendas, and so the case has been with the three-month moratorium on bauxite mining in Pahang. Whereas environmentalists across Malaysia celebrated the government’s decision to outlaw all mining activities, effective of January 15, some locals in Kuantan, the ground zero of pollution, would have had cause to greet it with rather more mixed feelings. Now why is that, you may justifiably ask? Because a moratorium on mining has deprived them of incomes, that’s why.

What with the market price of palm oil at a low, many residents relied on mining to supplement their fluctuating incomes. “They will not be able to earn that much if they continue to depend on the sale of oil palm, given the collapse of international commodity prices,” explained Mazlan Aliman, a president of National Felda Settlers’ Children’s Association, which represents a group of local palm oil cultivators.

Now that the miners are no longer allowed by law to operate on such plots, owners would need to convert their land back to growing plants, which is often unfeasible or impossible owing to the extent of environmental degradation, including the presence of residual toxins in the soil. And a mere three months of clean-up even in the absence of any further mining activities will hardly be enough to allow the often heavily polluted soil to recover. “The recovery process will take a long time,” Dr Faradiella Kusin, an environmental engineer, pointed out. That “long time” means years, and possibly decades. Since the pollution in the area lasted for over a whole year with intense mining activities, “the recovery will take even longer [than a few years] and there could be lasting effects,” she said.

Many Federal Land Authority Settlers (Felda) settlers in Kuantan may have violated the National Land Code by letting out their plots for non-agricultural use, but it is unlikely they will need to face legal consequences over it. Meanwhile, at least some settlers led by good example when they decided not to lease their land to unscrupulous mine operators. They foreswore on a short-term windfall so as to keep their land from suffering environmental harm.

In Kampung Felda Bukit Goh, for instance, some villagers became “instant millionaires” by letting out their land to miners, but Salwani Tajuddin wasn’t among them. She refused to sell out, even for RM1 million. Some villagers “have led a life of luxury after receiving high deposits from the bauxite operators, but the money can only last for a while and they have to wait a long time to get their returns from the bauxite mining,” the 37-year-old woman told Bernama. “There are settlers who are now forced to be security guards as their money is already spent and their oil palm land was completely cleared to obtain bauxite.”

Let that be a lesson to us all: when the health of your environment is at stake, short-term gain often comes with long-term headaches.