A Pregnant Female Tiger is Killed in a Road Accident 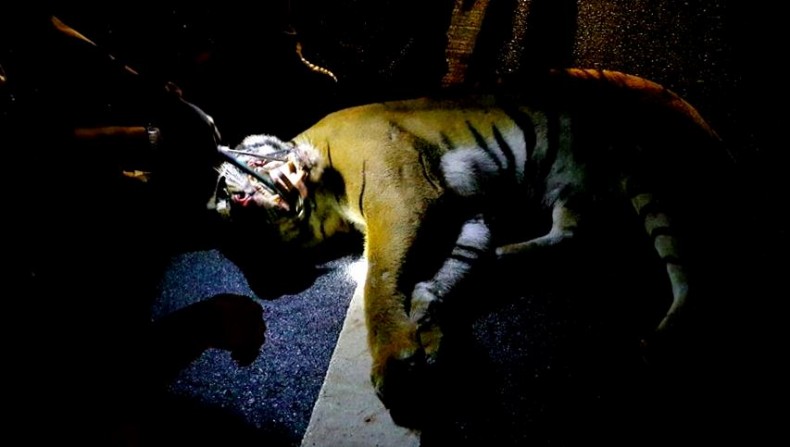 A heart-rending sight: a pregnant female tiger lies dead by the side of the road in Terangganu after she was hit by a passing car. Photo Credit: Facebook image

Barely a week seems to go by these days with yet more bad news about Malaysia’s beleaguered wild tigers. First came news of the death of a tiger at the hands of three poachers in Terengganu. Then came word of a blatant case of wildlife trafficking with a man carrying the carcass of a freshly killed tiger on his motorbike in Perak state. And now this: A wild Malayan tiger has been killed in a road accident on the East Coast Expressway Phase 2, near the 321km highway mark, in Terengganu.

The animal was trying to cross the road just after midnight on February 6 beside the Rasau Forest Reserve when it was hit by a car going at around 120km/h. She died instantly by the side of the road. With that, the country’s ever-shrinking wild tiger population, whose numbers might have plummeted to as few as 250, has suffered another blow.

To make matters worse, the latest casualty was a pregnant female carrying two cubs. Her death has brought the number of dead wild tigers to three within as many weeks in a development that has alarmed environmentalists. “Unfortunately, the demise of even a single individual is a huge blow to the tiger population, especially with recent evidence suggesting Malaysia only has about 250-340 tigers left in the wild,” WWF-Malaysia said in a statement. And these last three wild tiger deaths, the environmentalist group added, “are just the cases which have been recorded, as undoubtedly many more cases of tiger poaching remains undetected.”

Although protective highway fences line the expressway on both sides, they have been damaged in places, allowing animals to negotiate their way onto the road, which is flanked by forests on both sides. In recent years several tapirs and a Malayan sun bear have also been killed by cars along the same stretch of road that cuts through a protected forest. Roads crisscrossing Malaysia often wind their way through wildlife sanctuaries, further fragmenting already fragmented natural habitats. Infrastructure development, WWF-Malaysia notes, “has likely disrupted behavioural patterns and habitat use by large mammals, for example the elimination of tigers on the western portion of the North-South highway.”

Fragmentation of forests reduces wild animals’ freedom of movement and also brings them in ever closer contact with humans, often with deadly consequences to the animals. That is why environmentalists are fiercely opposed to the planned construction of a new paved road that will cut through the Lower Kinabatangan Wildlife Sanctuary in Sabah state. Malaysia’s Central Forest Spine Masterplan for Ecological Linkages has recognized the need for maintaining 37 forested corridors throughout Peninsular Malaysia in order to provide safe passages for native wildlife between fragmented areas of natural forests. However, many of such corridors have been eroded as a result of encroaching development.