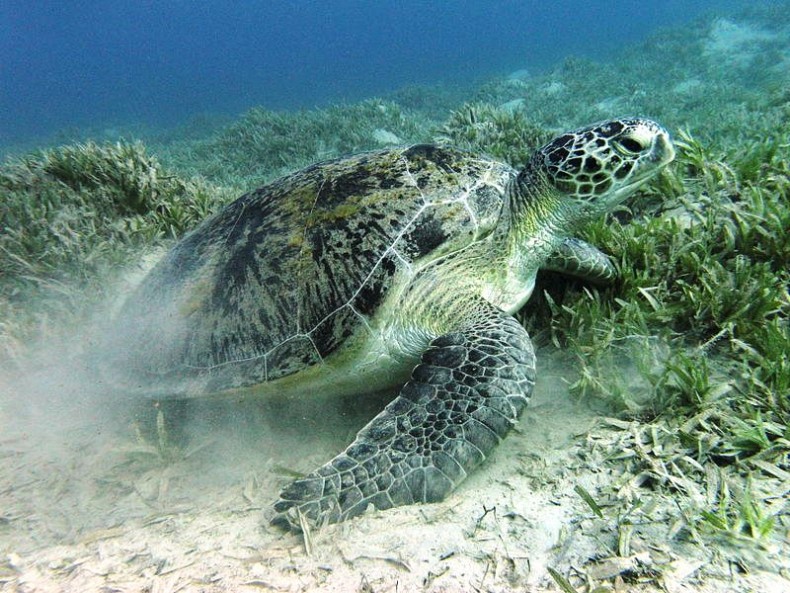 A green sea turtle feeds on seaweed. The placid reptiles are endangered in their diminishing habitats around Malaysia. Photo Credit: Wikimedia Commons

Turtles have long been known for their longevity, but these days green sea turtles are causing alarm among Malaysian environmentalists for a reason that places that renowned longevity of the placid marine reptiles at risk: many turtles’ premature deaths. According to the Terengganu Fisheries Department, a total of 59 green sea turtles are known to have died last year around the state, while at least another 47 of them had done so the year before. The last of the turtles to perish in 2015 was a female that was found dead on a beach in Kuala Terengganu in late December.

Alarmingly, 54 of the dead turtles were females and juveniles, which means that the viability of the remaining breeding populations in Malaysian waters has been further compromised, especially as many more green sea turtle deaths may not have been observed or reported. Overall, 55 of the animals whose deaths were recorded last year perished within the first six months of the year.

Local officials found that many of the turtles had died after they got entangled in trawl nets and other fishing gear. “The concern of fishermen for the turtles is still low despite awareness campaigns,” said Rosman Rusdy, director of Resource Management at the Terengganu Fisheries Department. Seaweed farmers have also been pinpointed in recent years as likely culprits behind at least some of the turtle deaths. “As the green sea turtles can consume an entire seaweed plot overnight, seaweed farmers are inclined to harm them,” said Dr James Alin, a researcher and animal rights activist at Universiti Malaysia Sabah.

In a bid to try and boost the local populations of green turtles in the wild, Terengganu’s Fisheries Department placed hundreds of thousands of eggs on beaches last year around the islands of Redang and Perhentian as part of an ongoing artificial nesting program. That may sound like a lot of eggs, but turtle eggs and hatchlings routinely fall prey to lizards, birds, fish and other predators, making young turtles’ chances of survival beyond their first year rather slim. Pollution and coastal development have also taken their toll on their traditional nesting sites on sandy beaches.

Although green sea turtle populations are relatively stable in the waters of Malaysia, the reptiles are listed as endangered with their numbers having declined precipitously over the last few decades. Known as penyu agar to locals, the green sea turtle (Chelonia mydas) nests on the beaches and islands of Terengganu, Sabah, Sarawak, Pahang, Johor and Perak.