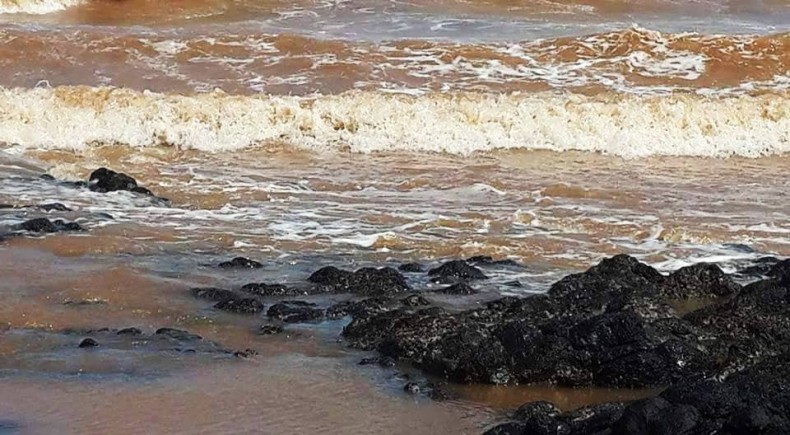 The sea near Kuantan, in Pahang, turned red from toxins that leached into from nearby bauxite mines. Photo Credit: Geram via Facebook

A lesson from the recent bauxite mining fiasco in Pahang, which has inflicted massive damage on the local environment, has been this: local politicians and authorities cannot be trusted to have nature’s and local people’s best interests in mind. They are supposed to be in charge, and yet when push came to shove they were found wanting. Not only that, but when the magnitude of the disaster became apparent, they shrugged off any suggestion they might have been culpable. Pahang’s Menteri Besar, Adnan Yaakob, was among them.

Most Malaysians could hardly have been surprised by that. Based on the entrenched networks of political patronage, the rampant corruption and routine official impunity across the country, few people expected Pahang politicians to face the music willingly. Yet face the music they should, and the anti-graft watchdog Centre to Combat Corruption and Cronyism (C4) wants to ensure that they do.

The group has accused Pahang’s government of dropping the ball on the bauxite mining disaster and called on the Malaysian Anti-Corruption Commission (MACC) to launch a probe into the fiasco in Kuantan. C4 alleges that local authorities willingly turned a blind eye to the activities of miners operating illegally or without proper licenses in the area. Malaysia’s aim, the group stressed in a statement, should be to find those responsible and hold them to account so as to “inspire confidence in state authorities, and help demonstrate genuine investigations, without fear or favour.”

The cause of justice and transparency certainly demands no less. If nothing else, alleged financial irregularities and contradictory statements issued by local officials about the extent of pollution in Kuantan alone should raise the alarm about their honesty. The watchdog has also called for a separate investigation into allegations that the state earned RM180 million of untaxed profits from bauxite mining. “Public funds are being used for repairing and cleaning the streets due to bauxite transport trucks, rehabilitation of bauxite mines and the cleansing of polluted waters, when the misappropriated funds should be used for these public services,” C4 noted.

Before the great extent of the harm to the local environment became apparent late last year, the state had profited handsomely from local mining activities, earning a windfall of RM46.7 million in 2015 (or almost double the amount from the year before), according to official records. For months, however, intense mining continued to wreak havoc with the local environment, destroying ecosystems, damaging the soil, and polluting water sources. Since all this damage could hardly have happened overnight, the logical conclusion is that local authorities had either turned a blind eye to it or else had failed to realize its extent. In other words, they were either willful accomplices or incompetent … or perhaps both. Let’s find out.