An Orangutan and a Gibbon Hit it Off 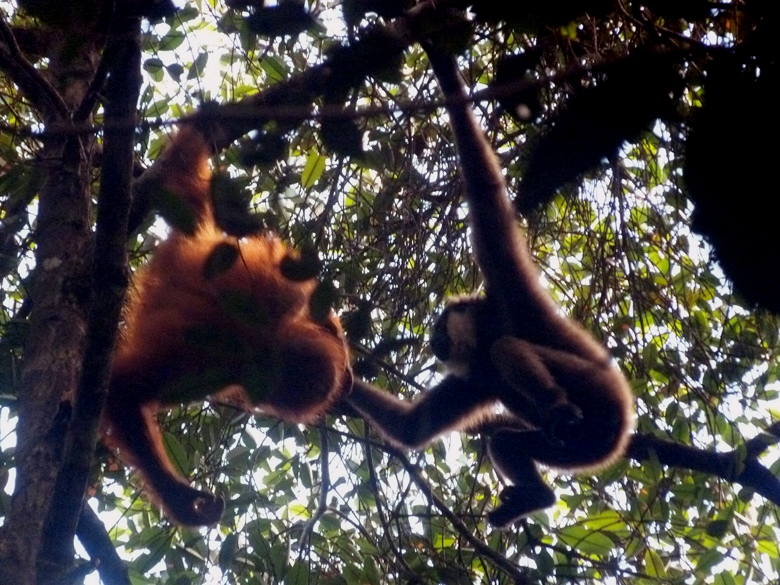 Oftentimes the world seems to be all gloom and doom. Wars. Terrorism. Rampant corruption. Injustices. Unending ethnic strife. We just don’t seem to get along. So let an orangutan and a gibbon show us the way. That’s right: a pair of primates in Borneo can teach us a thing or two about goodwill and friendship.

The two primate species occupy similar ecological niches in the island’s forests, which often makes them direct, and at times quarrelsome, competitors for the same resources. In other words, they don’t always get along. Yet recently researchers working in a peat-swamp forest captured footage of Fio, a young orangutan, frolicking merrily in the branches with Chilli, a gibbon. The two wild animals, both of which are around 5 years old, wrestled and chased each other for fun through the rainforest canopy.

“What started off as a typical day in the forest turned into something special,” said Tom Lloyd, a master’s student from the United Kingdom who recorded the video when he and a field researcher chanced upon the playful duo of primates. “We stood there in awe; amazed by these two individuals from different species just doing what youngsters do … having fun!”

Such delightful examples of interspecies bonding are rare (especially in the wild) but all the more memorable for that. A few years ago in the Cincinnati Zoo, in the United States, a fully grown orangutan took a shine to a female gibbon and her baby – an incident that was likewise captured on camera. Then again, perhaps we should not be surprised by occasional instances of camaraderie between the two primate species: they are both known for being highly intelligent and gregariously social animals that rarely turn their backs on a bit of mischief and fun. And if they can get along, so should we.