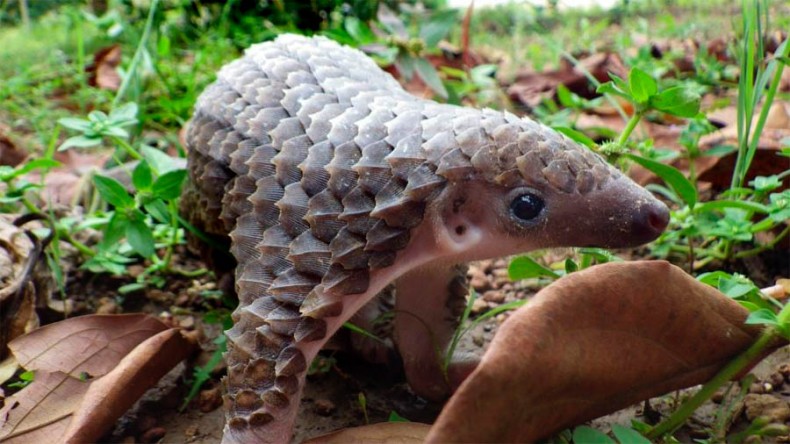 An inquisitive young pangolin explores its environment. Now, why would you want to eat a cutie like this? Photo Credit: Tim Hudson and Kamal Mistry

Long snout. Darting, sticky tongue. Black-button eyes. Scaly armor. Formidable claws. Tapering tail. Pangolins look like some alien species of mammalian warriors dreamed up by a cartoonist with an overactive imagination for a Japanese Manga Comics series. Yet for all their scales and claws, pangolins are gentle, inquisitive creatures that feed on ants and other insects, burrowing in search of them with ravenous alacrity in Malaysia’s forests and curling up into a protective ball at the first sign of trouble.

Unfortunately for these unique mammals, however, some people like to feed on them. In several countries across the region – including China, Vietnam, Myanmar and, sadly, Malaysia – pangolins are regarded as fine delicacies, while their scales are believed to possess medicinal properties (which they don’t). That, needless to say, means that there is an insatiable demand for wild pangolins so the animals, which are also known as “scaly anteaters,” routinely end up as victims of the illegal wildlife trade.

In a move (which comes not a moment too soon) to protect its diminishing local pangolin populations, Sabah is now considering outlawing the hunting of pangolins in the state’s forests. Currently, the scaly mammals can be hunted with a license. “It is high time for us to look into the status of the pangolin in the state and within the wildlife enactment,” said Masidi Manjun, the state’s minister of Tourism, Culture and Environment. High time indeed. The four subspecies of pangolin that live around the region are now listed as either endangered or critically endangered. Among the latter is Malaysia’s own Sunda, or Malayan, pangolin (manis javanica), which live in Sabah’s forests. Environmentalists are concerned that unless the animals are better protected in the wild, they will soon be driven extinct from Sabah’s forests.

Complicating matters, however, is the fact that poachers often kill and butcher trapped pangolins on the spot so as to disguise their meat. “If it’s a meat product packed nicely, it’s difficult to distinguish whether it is pangolin, [which] makes it easier for it to be smuggled,” Masidi said. Huge demand for the animals’ meat, he added, “motivates a lot of people to hunt for pangolins in the jungle.”

Not long ago wildlife rangers intercepted a shipment of a staggering five tons of pangolin meat (worth RM3.9 million on the black market) on a boat in the Sandakan area of Sabah. “It was shocking to me. Can you imagine the number of pangolins killed over a long period of time?” the minister recalled. We can hardly begin to imagine the extent of the brutal slaughter involved since a fully grown Sunda pangolin weighs only a maximum of 10 kilograms or so.