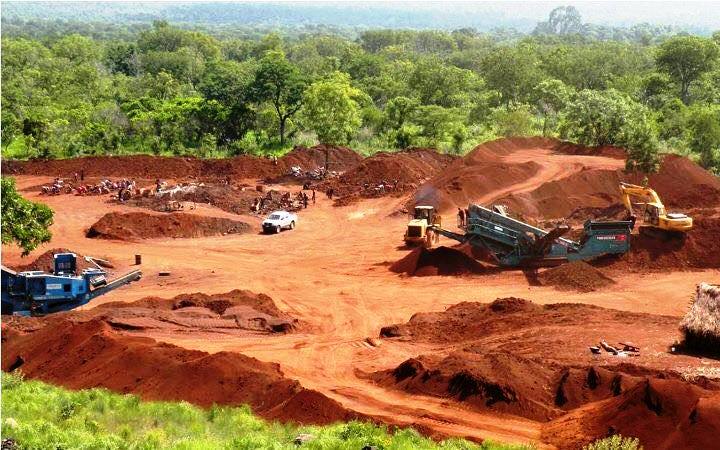 Bauxite mines have left visible scars in the environment of Kuantan. Photo Credit: GERAM via Facebook

We’re several weeks into a three-month moratorium on bauxite mining in Pahang, but things aren’t looking up as much as they could be. It will take an estimated 50 years to repair the environmental damage done by irresponsible mining – sad news to local farmers and fishermen – and short term goals are hitting roadblocks as well.

Moving forward, government authorities will require mine operators to use only safer Pakamatic lorries for transporting bauxite ore to Kuantan Port. They have also given operators a one-month deadline for cleaning up their bauxite stockpiles at the port to reduce the hazards of environmental pollution.

That cleanup deadline expired a few days ago. And where do we stand? Only a fifth of the 10 million tons of bauxite stockpiled at the port has been successfully exported so far, that’s where. Some operators say they will need all of five months to get rid of the rest. “At least 90 lorries come and go. They need to be cleaned or washed accordingly and it has gone on continuously,” said Bahazelan Abd Wahab, manager of Jauhari Permai Sdn Bhd, one of 10 contractor companies that have been tasked with clearing the stockpiles. 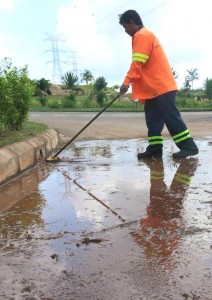 A worker cleans up run-off from a nearby bauxite mine in Kuantan. Photo Credit: GERAM via Facebook

He added that his staff of 80 people have been working around the clock to complete the clean-up, “but because of the high volume, it is quite impossible for us to complete the job within the time frame.” The government wants the backlogged stockpiles of bauxite cleaned up at the port so as to improve the industry’s environmental standards. Bauxite waste has affected at least 39 locations and 17 residential sites, and much of it has reportedly been cleaned up since with more or less success. Dr Wan Junaidi Tuanku Jaafar, minister of Natural Resources and Environment, says contaminated soil in Pahang can be restored but that it will take around 50 years for it to recover fully. He recommends cultivating cover crops such as legumes that can aid in draining pollution away from the soil.

That half-century timeframe will come as cold comfort for many farmers who will have seen their farmland put out of action for the next two generations. Yet fixing the local environment will be a Sisyphean task, especially as many mine operators who caused the massive damage in the first place will likely bail out on the requirement. “Rehabilitation isn’t likely, especially not by illegal miners,” said Prof Jamal Hisham Hashim, a research fellow for the United Nations. “They can leave it to the land owners to clean up the mess.”

Of the 1,200 hectares of land that was used by bauxite mines in Kuantan, as many as 790 hectares belonged to former oil palm plantations cultivated by Federal Land Development Authority (Felda) settlers. Their chances of successfully regrowing palm trees on the site are low because large deposits of chromium have built up in contaminated soil from bauxite run-off. Ironically, many of those farmers willingly leased their plots to fly-by-night operators in exchange for short-term windfalls. The lesson: A quick paycheck or two now might come with a very heavy price in the future when the health of the environment is at stake.